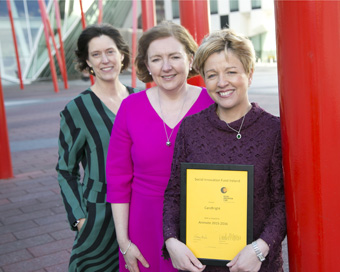 The incidence of dementia is set to almost double in Ireland within the decade – but an award-winning Co Limerick firm has come up with a blueprint which transforms the way we care for people with the condition.

CareBright, a social-economy-based, not-for-profit-taking organisation based in Croom, was presented with a prestigious award recently by An Taoiseach for its visionary plan for a €5.48 million purpose-built ‘village’ for people living with dementia – the first of its kind in this country.

CareBright, which hopes to complete its ‘village’ project next summer, was one of just four companies to receive a prestigious Animate award from the Social Innovation Fund Ireland (SIFI).  SIFI was established by the government in 2014 to raise a minimum of €50 million and provide funding to support Ireland’s most promising social enterprises and innovators, thereby targeting solutions to some of our most critical social issues.

And dementia, as both the general public and the health sector are increasingly beginning to acknowledge, is a critical social issue.  There are currently 48,000 people living with the condition in Ireland, 4,000 of them under the age of 65. By 2026, experts predict, this figure will soar to 82,000.

Six years ago, CareBright was already looking at what was coming down the track and researching possible solutions.  It sent a team of experts abroad to examine possible solutions put forward by other countries, to what, within a decade, is expected to become, one of the most pressing social issues of our time.

Established in 1998, the company is a key provider of homecare services to the HSE and provides care for the elderly, those with disability, people who need chiropody, post-operative or palliative care. It employs some 270 carers who currently look after more than 650 clients throughout Munster – 60% of whom have dementia.

It was in 2010, says business development manager Majella Murphy, that CareBright started to consider the possibility of a supported  home-from-home option for clients living with dementia. This was, she says, in the context of the fact that many CareBright clients living with dementia were physically well and capable of having a productive and healthy lifestyle providing they had a strong support system.

“Unfortunately,” she explains, “for those who do not have a support system, a nursing home is often the only option. They work for some people but don’t work for all.”  After extensive research involving trips to dementia-care facilities in the United Kingdom and The Netherlands, the company came up with the concept of a supportive home-from-home environment for those living with dementia.

Team members were particularly impressed by a complex just outside Amsterdam, De Hogewyk, a purpose- built ‘village’ for people living with dementia which allows them to live independent but supported lives in a community.  “What we are planning is something along those lines, but we are very much implementing our own vision for a CareBright Community,” she explains.

The complex of three bungalows set amid spacious gardens on a four-acre site nestled in the heart of the community of Bruff, will place a very strong emphasis on life as normal with a strong sense of community.  Each of the bungalows will comprise six individual units, all surrounded by expansive landscaping and state-of-the-art facilities, including a working and sensory garden, a community gym and a café and day-care hub.

Already €4.5 of  the €5.4 million price tag has been secured through a combination of CareBright’s own cash reserves and funding from the JP MacManus Benevolent Fund and the Department of Health.  The company is now assiduously fundraising to bridge the shortfall for the complex, where, it’s expected, people will qualify for accommodation through the Fair Deal Scheme.

Last September it entered its vision for a CareBright Community for the Animate awards, which, in effect, is Ireland’s first ‘non-profit accelerator’.  Last month CareBright was one of four award winners at the organisation’s first showcase and pitching event along with ReCreate, Thriftify and Save a Selfie.

“What we do with that money, is we open a call for applications and advertise the call,” she says, explaining that the Animate Call was looking for top-flight early-stage innovations.  SIFI will be putting out another Innovation Call on June 21st, details of which are as yet, unavailable.

Its work is particularly important given the recent winding-down of major philanthropic organisations, such as Atlantic Philanthropies and The One Foundation – a development which resulted in a potential gap opening up in the funding of social projects designed to achieve a more inclusive and fairer society:  “SIFI is another way of  ‘giving’ – at the end of the day we are looking to grow the level of strategic, planned giving in Ireland,” says Eilís Murray, Director of Philanthropy Ireland.

“This innovative model of funding is very welcome. We are very underdeveloped in Ireland in terms of philanthropy and giving, even by European standards.”  This is partly because the Ireland does not have the same level of ‘inherited wealth’ as other countries, she says, adding that while we are traditionally a very “giving” population, our ‘giving’ is more reactionary than strategic.

“We commend the Government for providing a challenge fund to stimulate philanthropy as we move into an economic recovery. It is critical that we ensure an inclusive recovery and creating Social Innovation Fund Ireland, and matching all funds raised euro for euro is an innovative funding model that we welcome.” Meanwhile, however, as a result of its win, CareBright received access to a range of top-flight experts who, explains Murphy, provided crucial guidance and support on strategy, marketing and branding.

The company now plans to turn the first sod on its CareBright Community project later this summer, and expects the complex to be completed sometime next summer.  “This is going to change the face of dementia care in Ireland,” says Majella Murphy.  “There is an increasing awareness of the growing problem of dementia within the general community and the health sector, and I hope to see our unique model of care in the Carebright Community replicated at a national level.”

A new report published by Glassdoor, a...

There has never been a female president of...