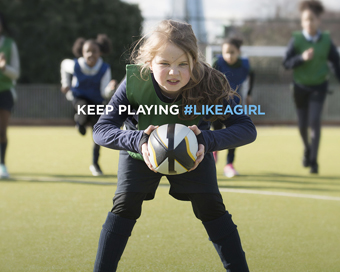 Data from the most recent ‘Always Confidence & Puberty Survey’, shows that by the end of puberty, over half of girls surveyed (64%) will have quit playing sport.

To help shed light on this issue, Always partnered with Academy Award-nominated documentary filmmaker Nanette Burstein to find out how girls feel about playing sport.

The new #LikeAGirl video, asked girls about their athletic experiences, the challenges and the benefits, what helped them stay in the game, or what led them to quit. Hear their stories and be motivated by their passionate rallying call for all girls to keep playing by watching the Always Keep Playing #LikeAGirl video.

“As someone who grew up playing sport, and also as the mother of a seven-year-old daughter, I know how important participation in sport can be in helping girls build the confidence and skills that will serve them throughout life. It’s my hope that this video will spark a conversation and inspire girls to keep playing sport. I love and support the #LikeAGirl campaign and I’m thrilled to be partnering with Always ahead of the Olympic Games to shed light on this important issue,” said Nanette Burstein.

Many studies have found that ongoing participation in sport significantly contributes to confidence in girls, at any level, and provides valuable skills to help them stay confident to do any and every thing later in life. In fact, a recent 2015 study of consumers in the UK showed that women aged 18 to 24 are twice as likely to be confident if they play sport regularly, compared to those who do not play at all.

Additionally, the recent Always survey found that girls reported that three of the top benefits of staying involved in sport are increased confidence, teamwork, and staying in shape. However, despite the known benefits, girls still report that they don’t feel like they belong in sport. Further, 67% of girls feel that society does not encourage them to play sport.

“The Olympic Games is a time when – all around the world- female sports participation is elevated in the public eye, and for that reason, we could not think of a better moment to drive awareness of the critical role sport play in building girls’ confidence,” states Michele Baeten, Associate Brand Director and Always #LikeAGirl leader at Procter & Gamble. “We will rally and unite Olympic athletes, the International and National Olympic Committees and other organisations, to spark a change and inspire a world in which every girl truly feels that she can play sport and will Keep Playing #LikeAGirl!”

Some of the key findings included:

· By the time girls reach the age when they finished puberty (16-17 years old), 64% will have quit sports

· The top challenges for girls continuing to play sport are that most people believe girls become more self-conscious about/dislike their body (50%), most believe girls are worse at sport than boys (34%) and the lack of respect for girls in sport (32%)

· 61% wish there were more female role models in sport

Employers Will Struggle To...

Steady jobs growth has continued in the FDI...