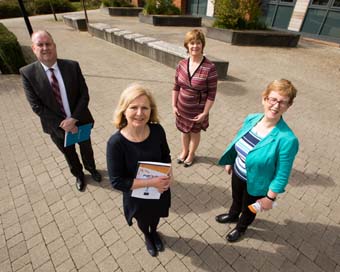 A new software application, designed to help break the glass ceiling in academia globally, has been launched at the University of Limerick (UL) today.

The application was developed by Lero, the Irish Software Research Centre, as part of an EU funded gender equality project. FESTA (Female Empowerment in Science & Technology Academia) received EU funding of €4.3m of which €730,000 is allocated to UL. The software application – The FESTA Strategic Career Manager – has been developed at the University of Limerick (UL) in collaboration with six international universities.

“Less than 20% of professors in Ireland are female and less than 21% in Europe,” commented Professor Ita Richardson, Lero researcher at the University of Limerick. “There is clearly a serious gender equality issue which has been recognised by the EU.”

Professor Pat O’Connor, who led the FESTA project in UL, added, “The FESTA Strategic Career Manager will be available globally and it will be particularly important in supporting women at the critical early stages of their careers.”

Following detailed research of the career paths of over 100 female and male academics across Ireland, Denmark, Bulgaria and Turkey, FESTA research has identified 39 potential barriers to gender equality in academia.

Dr Clare O’Hagan, FESTA Project Manager at the University of Limerick led the development of workshops and training programmes which, combined with the software application, are designed to assist female academics progress their careers and break through the academic “glass ceiling”.

“While the basic premise of the project is that organisations need to change to support women (e.g. are there unconscious biases in recruitment procedures, in decision-making etc?), there is one section on how women can progress their career themselves,” says Professor Richardson.

The training modules cover a range of career related issues. These range from developing a publication strategy and academic networking to enhancing their visibility, honing their negotiation skills and leveraging family support. The modules have been developed with input from a range of disciplines including science, engineering, sociology, gender studies, HR and behavioural science.

“There has been a serious historic gender bias across science not just in terms of promotion but even in the development of technology itself,” said Professor Richardson. “For example, seatbelts were originally designed for male bodies not female. Research into heart attack symptoms were male focussed not female.”

On the barriers continuing to face female academics, Professor Richardson says: “This is very complex – there is no one thing responsible for the position of women in the field.  There is a shift which says that it is not the women who are at fault – but wider societal and organisational issues need to be dealt with.”

She added, “We will be seeking funding to commercialise the FESTA Strategic Career Manager as this software application has huge potential for female academics across the globe.”

Professor O’Connor said, “It is significant that the University of Limerick was selected a FESTA partner as 31% of those at professorial level in UL are women, compared to the national average of 19%.”

She added, “The programme complements the work of Athena SWAN for which UL received a Bronze Award in 2015.  This charter helps to combat the under representation of women and to advance the careers of women in science, technology, engineering, mathematics and medicine (STEMM) roles within the higher education and research sectors.”

The Other Lens: Throwing out...

I read a great article in The Jakarta Post...

A new report published by Glassdoor, a...