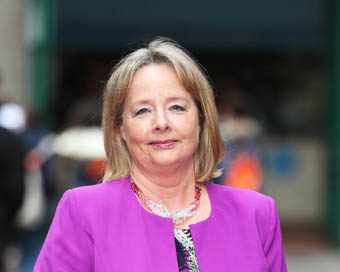 News is not like any other business – it helps us form opinions, decide who to vote for and impacts strongly on our day-to-day decision-making. Remember, observes Nessa Childers, MEP, “its relation to democracy is huge.”

News and how it’s disseminated is an issue that has engaged Childers since  2009, when the bitter debate in the European Parliament about Silvio Berlusconi’s control of the Italian media hit headlines all over the world.

Childers was fascinated at the time and now, some seven years later, the psychotherapist-turned-MEP from Clonskeagh is about to hold a major conference on the issue of media diversity and ownership. The all-day Newsocracy event, which takes place on June 3rd will not just examine both print and online media but will release new findings from research undertaken by Childers in partnership with the Institute For Future Media and Journalism, Dublin City University. This research, she hopes, will start a very important conversation.

It examines the relationship between large media shareholders and media content through coverage of four major news stories in Ireland between the years 2012 to 2015 and looks at how social media affects different news organisations differently, through a series of interviews with these organisations to find out about their experiences.
“We have problems with the control of the media in Hungary and in Turkey, and it’s becoming a bigger issue all the time,” says Childers, adding that the conference will debate the concept of media diversity.

“I’m concerned about the way the media is going in Europe,” she confides, adding that conference will also examine digital democracy, social media and whether the growing consolidation of media is something we really should worry about. It’s a long-term issue, she acknowledges, but an important one, given that trends in the ownership of traditional media show that it’s steadily concentrating into the control of fewer corporations, something which is of interest – and should be perhaps of concern – to everyone and not just interested politicians.

Childers, of course, comes from a heartland political family – her father Erskine Childers,  was a Fianna Fáil minister and later President of Ireland, while her grandfather Robert played a significant role in the 1916 Rising. It’s no surprise then, 59-year-old former university lecturer, who now divides her time between Dublin, Brussels and Strasbourg, never fails to keep a close eye on what’s happening in politics at home.

And one of the big things that’s happening and hasn’t stopped happening to the embattled government which introduced it, is the raging controversy over water charges.
Childers, actually, was in favour of water charges from the get-go – though no fan, she emphasises – of the way it was done; water charges, she points out, were conceived in the middle of a bailout and involved sums which many couldn’t pay.

“It was a disaster the way it was done,” she says, adding that she believes that as a result of how it’s been handled,  the controversy will rumble on for years. Water is not nearly over and done with yet, she predicts, adding that this is not good enough – the taxpayer should know how much the water issue is going to cost. Childers believes water charges should have been introduced 15 years ago, back in the late 90s: “It came very close, but there was a general election and the issue of water charges just disappeared.”

This was a missed opportunity, she feels, because if it had been introduced back then, everyone would be used to the idea; now, however, it’s an ever-more poisonous issue which sends politicians scrambling for cover.  After all, she points out, how can you enforce water charges? We cannot, she observes, have a situation where you have people’s water being cut off. Water, she ponders is a human rights issue – “it’s not like electricity and people cannot live without it.”

As a psychotherapist who ran her own private practise up to six years ago, Childers is also quick to take up the cudgels on behalf of the self-employed: “It drives me wild the way self-employed people seem to be invisible in terms of social welfare and tax breaks,” she declares. “I saw what was happening to the self-employed during the crash when businesses went to the wall and there was no safety net – not enough attention has been paid to the self-employed over the decades,” believes the former Green Party counsellor who says her life changed “in ways that are impossible to describe” when she joined the European Parliament and gave up her private practise.

Suddenly the mother-of-two adult children was spending most of the week in Brussels – she wouldn’t have done it when the children, both now in their twenties, were young, she says. The constant travelling can be gruelling, but she says it leaves you a choice between whinging all the time or seeing it as an adventure. She’s decided to opt for the latter: “I see large airports as an opportunity for exercise. It can take 40 minutes to walk from one end of Schipol to the other-  I take advantage of that to get my walks in!”

The Newsocracy conference is being held in partnership with the Group of Progressive Alliance of Socialists and Democrats in the European Parliament (S&D), the Institute for Future Media and Journalism (FUJO), the European Centre for Press and Media Freedom, and the European Federation of Journalists (EFJ). For more information on the conference or to reserve a place, please visit www.nesschilders.ie/newsocracy

'Wellbeing' is one of those buzzwords thrown...