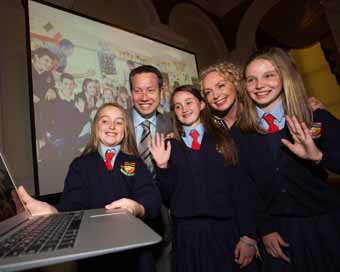 One-quarter of Ireland’s rural population would be forced to move to urban locations if it wasn’t for broadband, a comprehensive new study into digital connectivity in rural Ireland has revealed. And while broadband penetration is as high as 90% in some rural locations, one-in-five respondents in the countryside say they still can’t get access to broadband at all.

These findings and more are contained in the research report, Connected Futures: Bridging Ireland’s Urban-Rural Divide, produced by Amárach for Vodafone Ireland. The study is based on face-to-face interviews with 1,000 adults as well as a telephone survey of 100 micro businesses across rural Ireland and uniquely asks respondents about their current experiences and aspirations for a digital future.

Minister for Regional Development, Rural Affairs, Arts and the Gaeltacht, Heather Humphreys said: “This report provides an important insight into the impact connectivity has on the lives of people in rural Ireland. The results underline the benefits of high speed broadband, while also highlighting the scale of the challenge we currently face in improving connectivity in rural areas. As part of my new remit for Rural Affairs, I will be working with local authorities and other agencies to help accelerate the roll out of broadband in rural Ireland. The Government will also continue to work with commercial providers, including Vodafone Ireland, to identify the broadband blackspots which are in need of State intervention, so that we can ensure that within five years every home and business will have a high speed connection.”

Anne O’Leary, CEO Vodafone Ireland said, “This is a landmark piece of research which looks at the priorities, realities, expectations and hopes of rural Irish life according to the people who live there.  It is clear that people in rural Ireland are embracing technology and using it across all aspects of their lives but the digital divide still prevents many from participating fully in a ‘gigabit society’ – bringing together our unique rural and urban heritages in a future Ireland where there is light speed connectivity for everyone, everywhere. The possibilities and benefits of digital connectivity are endless not just for rural Ireland, but the country as a whole. The majority of our population still live in rural Ireland and it will be critical that all of society is in a position to take equal advantage of the digital revolution.”

Some of the key findings to emerge from the research:

Connectivity is enabling many rural dwellers to Live, Work, Play…

– Of the estimated 1.8 million broadband users in rural Ireland, nearly 1 in 4 (430,000 adults) uses the internet at home in relation to their work: and nearly 150,000 of these choose to avoid commuting some or all of the time because they can connect to work through the internet (that’s about 1 in 13 workers in Ireland as a whole).

– Three-quarters of respondents (74%) agree it is easier for their family to keep in touch with each other because of digital technology and half (51%) say access to the internet makes it easier to meet people and make friends.

– Two-thirds (63%) feel that the internet means they have all the same shopping options as people living in cities and more than half (57%) agree that having access to the internet in their area makes life easier.

– Almost seven in ten micro-business owners (69%) agree that slow and unreliable internet speeds currently prevent them and their staff from working efficiently.

But, the digital divide prevails

– A quarter (24%) of respondents say their broadband speed is too slow (rising to 44% living in detached houses in countryside) and one in five (20%) are currently forced to go to venues outside the home to access the internet.

– While nearly half the respondents (44%) would be willing to pay more for access to higher speeds at home, the vast majority (81%) disagree that that they should be expected to.

– One-third (30%) say that slow and unreliable internet speeds currently prevent them and/or family members from working from home and that their internet speed at home isn’t fast enough for all their family requirements (33%).

– Over 65s are less likely to own technology and fewer than half have broadband at home. One-third believe they are lacking IT skills.

– 77% would welcome a role for digital technology in making it easier for people to start-up businesses in rural Ireland rather than having to relocate to major towns and cities.

– Three-quarters of those surveyed would welcome a future where it’s easier for local students to study at home over the internet rather than travel – and up to 70% would welcome a situation where young people won’t have to move away from rural Ireland as there will be more work opportunities nearby thanks to technology.

– A growing rural population would be welcomed by two-thirds (68%) as it becomes easier for people to move there from towns and cities.

– 7 in 10 respondents say that feeling safe is very important to them – and a total of 82% would welcome an arrangement for remotely monitoring homes to provide in-home security. 85% would welcome a future in which older people living alone will be monitored remotely using technologies in their home connected to medical professionals.

– More than six in ten people would welcome a boost for farming as technology enables the automation of more processes.

Gerard O’Neill, Chairperson, Amárach Research said, “This report is the first of its kind, where people all over rural Ireland have given their views and experiences of the impact of digital technology on how they live and work. The majority of the population of this country actually resides in rural Ireland* and we know from the feedback that the appeal of rural life is as strong as ever. This research provides an important benchmark of where we are today and where the people of rural Ireland want to be in the future when it comes to the role technology plays and we hope this report will contribute to the nation’s conversation about the digital future of rural Ireland.”