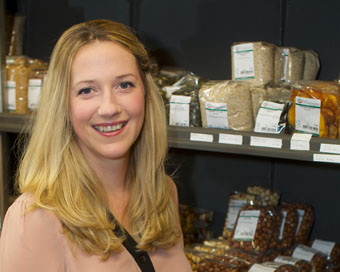 County Cork based Dee’s Wholefoods, founded by veggie entrepreneur and Dragon’s Den graduate Deirdre Collins, has launched its 100% vegan sausages in 300 Holland and Barrett stores across the UK.

These meat-free sausages are available in three varieties; i) Roast Garlic and Mushroom; ii) Leak and Onion and iii) Traditional Vegan Sausages. “Our sausages are made using one of Ireland’s oldest and most traditional ingredients, Dulse seaweed” explains Deirdre Collins, who developed the products working closely with BIM Seafood Development Centre in Clonakilty and Enterprise Ireland.

The Dutch Government-funded Stichting Voedingscentrum Nederland (Netherlands Nutrition Centre Foundation) recently issued a recommendation that people should eat no more than two portions of meat per week. The advisory was published following a 5-year study of the health and and ecological impacts of a typical Dutch diet. The foundation’s new guidelines advocate limiting meat consumption to just 500g per week, of which only 300g should be red meat. Instead, the research body suggests that people look towards other sources of proteins such as pulses and nuts.

Dee’s Wholefoods saw an outstanding 82% growth year-on-year export sales in the 2013-2014 and the trend is continuing with more outlets and markets coming on stream in 2016. The products are now available in several countries including Ireland, the United Kingdom and in supermarkets across the Netherlands.

Most Reputable Firms In...

Bord Bia has been named the most reputable...