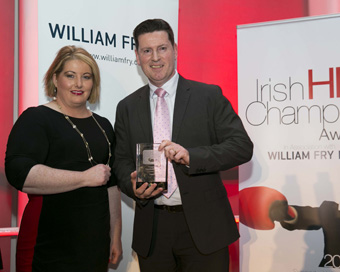 The awards were held at Dublin’s Guinness Storehouse and more than 200 people attended. PayPal received the award in recognition of its inclusion initiatives such as providing support for women in business.

The global payments leader received the award in recognition of its key inclusion initiatives. These include providing staff with diversity and inclusion training, supporting women in business, supporting a ‘yes’ vote in the Marriage Equality Referendum, PayPal’s commitment to hiring from the live register and having a vibrant multicultural workforce.

Speaking about the award, Louise Phelan, Vice President of Global Operations for Europe, the Middle East and Africa, said: “Winning this award is an incredible honour for all of us at PayPal. Inclusion is a core value of ours, and we place real importance on valuing uniqueness and diversity of thought. That’s why we invest in programmes like our tailor-made Diversity and Inclusion workshops and continue to develop other new inclusion initiatives.”

“PayPal is an extremely diverse workplace because we support our customers and merchants through 12 languages from our centres of excellence in Dublin and Dundalk. I’m really proud that we have been recognised as a company that leads the way when it comes to diversity and inclusion.”

(Pictured L-R: Judge Ann Hinds and Paul Ryan, Senior Director of Compliance, Risk and Financial Services Operations for Europe, the Middle East and Africa, who accepted the award on behalf of PayPal.)

Qualtrics, an insight platform which has its...