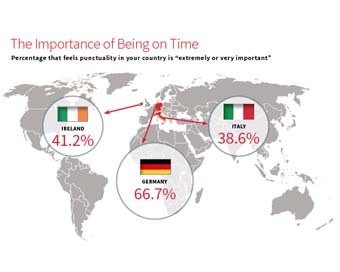 Qualtrics, an insight platform which has its European headquarters in Dublin, released results of the 2016 Global Attitudes Toward Work Report, which provides insights into what is important to workers in Ireland and globally, and it found that Irish workers have relatively high productivity levels and low concern for punctuality.

“Considering work is such an integral part of a person’s life, a country’s collective satisfaction at work says a lot about how satisfied its people are overall,” says Dermot Costello, Managing Director Qualtrics Ireland. “This is why it’s so important to understand what employees are looking for and how to keep them engaged.

Looking at motivational factors to work, Qualtrics found widely varying responses. For the Irish and all countries surveyed, the primary motivator was a need to support themselves and their families financially, followed by enjoyment and building wealth. Whereas for other countries factors such as saving for retirement (Spain), feeling like productive members of society (The Netherlands) and being with other people (Sweden) were also important factors.

– Compared to other countries the Irish worker has above average levels of personal productivity at work.  The Irish say that 67.3% of hours worked are productive compared to Germany (72% of hours) and Italy which reported less than half (48.5%) of hours worked being productive.

– When asked to evaluate what percentage of hours worked were productive on average in their country the Irish reported 62% compared to the Dutch who reported 67.8%. Again the Italians reported the lowest levels of perceived national productivity with less than half (46%) of hours worked being reported as productive.

– Being on time is not as important to the Irish as other countries, only 41.2% regard it as being ’extremely or very important’ whereas Sweden (67.3%)  followed by Germany (66.7%) placed the most emphasis on punctuality.

– More Irish people are dissatisfied with their job (51.2%) than those who are ‘extremely or moderately satisfied’ (48.8). The Germans, French and Americans all report the highest levels of satisfaction with their jobs with just over 64% expressing their satisfaction.

– When asked about work life balance the French and Americans report the greatest satisfaction with 68% stating they are extremely or moderately satisfied compared to 50.5% of Irish workers surveyed and the Greeks who report the lowest levels of satisfaction (36%).

– Formal work attire is not important for Irish workers (27.2%) whereas the French,  place the greatest importance on it with over 55% of respondents stating that it is ‘extremely’ or ‘very important’ followed by the Italians and Spanish both at 47%.

– An in person meeting is still the most preferred meeting mode for all countries surveyed (Ireland 83.5%) but in the U.S. there is greater acceptance of telephone (15%) and video conferencing (31%)

– Unsurprisingly, the Netherlands represents the highest level of bike usage to get to work 11% compared to just 1.5% in Ireland.

– Taking the train to work is more common in Greece than any other country at 32% compared to 5.3% in Ireland.

– Some people like to receive lots of feedback from management, the Spanish expressed the most desire for frequent feedback, with over 50% stating that they’d like feedback weekly or more often, less so for the Irish (36.7%) and only 26% of the French wanted feedback that frequently.

Where and who to work for

– When deciding where to work Qualtrics asked what was most and least important. For Irish workers, salary (23%), work/life balance (16%) and location (11%) were most important while having the option to work remotely, knowing the company direction and working within a specific industry were the least important in that order.

– Looking at preferences for what type of company is most appealing to work for by country shows that most people in all countries including Ireland (except the Netherlands) feel that working for a large established company is the most appealing kind of workplace.

– Being part of a start-up wasn’t very appealing to the Irish (11.8%) or for most other countries apart from the French (16%) who out of all countries surveyed were the most likely to report working at a start-up as the most appealing kind of job to have.

PayPal announced that it won the coveted...