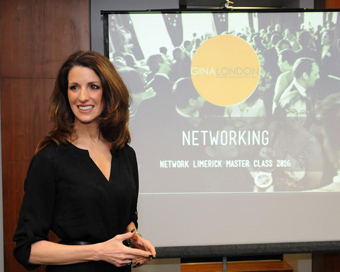 A few years ago, the American city of Baltimore wanted to launch its first ever Grand Prix.  This, the planners envisaged, would be a prestigious, colourful, and hopefully lucrative event. However, it would also affect residents and communities throughout the city, so Gina London, international communications expert and former Emmy award-winning CNN correspondent and anchor now based in Cork, was brought in to do the public outreach campaign.

Gina, who has formerly served as senior vice president and strategist for one of the largest government affairs firms in the United States, recalls:  “I laid out the public involvement campaign and planned what it would take to bring everyone affected by the proposed route of the Grand Prix into  the discussions – churches, neighbourhood associations and so on.”  However, she says, in the end, the event the organisers chose to take what she describes as “a far less inclusive route,” excluding many interested parties from the discussions.  The Grand Prix launched amid much fanfare. It ran for a couple of seasons and then never ran again.

This, believes London, was largely due to that initial reluctance by the organisers to make a concerted effort to capture the hearts and minds of all the many different types of communities impacted upon by the event.  It’s a long way from the Baltimore Grand Prix to the seat distribution in Dáil Éireann, but there’s a moral in the story for anyone who wants to see it.

It’s all about inclusivity, believes London, who also worked as a campaign strategist for the first female candidates running for the Iraqi parliament in 2004 – where incidentally, a quota system had, like Ireland for this election, been initiated.

She’s heartened by the implications of the significant hike in women taking up seats in the Dáil this time – the number of women TDs is now 35, compared to the significantly smaller number of 25 female TDs elected in 2011.  “The good thing for the Dáil and for Ireland is the diversity of experience these women will bring to the parliament,” says the globe-trotting London, who has worked with companies like Heineken, SAP and Guaranteed Trust Bank in West Africa.

“It’s not because we believe women are the only ones who can get things done, either for women or on families issues, but the point is that in many situations from government to business, organisations should be reflective of the customers that they serve.”

“These women, now in the Dáil, will, like any candidate have to prove their substance and their dedication and their commitment to their constituencies.”  It’s a no-brainer, she observes – whether you’re running a government or a large corporation, the more inclusive you can make your organisation and the broader the range of views you take into account in policy-making, the broader your world vision, so to speak:  “This is essentially about Stakeholder Management 101! The more you take into account your stakeholder’s views, the more you can develop policies addressing the needs and hopes of those stakeholders.”

“If you have too narrow a perspective from the point of view of decision-making, gaps will emerge in policy which will in turn result in a backlash.”  The advent to Dáil Éireann of more women, she says, will not simply be better for women generally but for Ireland as a whole – simply because it improves the diversity of this country’s policy makers.  “Organisations need more diversity of opinion in the room. Decision makers must discuss different perspective in order to ensure that all the bases are covered so that the final outcome reflects that those different voices,” she warns.

Yes, the numbers of female TDs is still small, she acknowledges, but they’re improving:  “The challenge is that before we take stock we still look at where do we want to get to – we want to continue improving on that momentum!”  The quota system introduced in Iraq all those years ago was successful because it brought women to the game, says London.

“Big kudos to Ireland for its progressive mind-set and for being brave enough to reach out and massage the mind-set of the people.  We don’t know if the introduction of a quota system was the actual trigger for the increase in the number of women elected, but it certainly opened the field to more women – and once the mind-set is in place it creates an awareness, and pivots the mind-set of the electorate further towards the possibility of electing more women.”