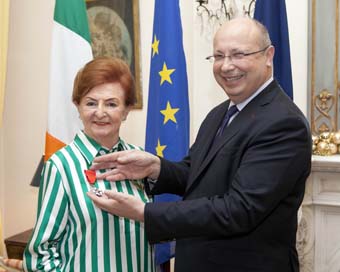 The Legion d’Honneur is France’s highest honour and recognises Ms O’Donoghue’s exceptional career and the constant friendly support she has personally provided for the further development of friendly ties between France and Ireland.

Ms O’Donoghue is currently Board Member & Group Director, Business Development & New Markets at Penneys/Primark. During her 37 year career with Primark, Breege has been directly involved with others in the transformation of the business from a small Irish retailer to an international fashion brand, with over 300 stores across 10 countries.

Primark opened its first store in France in December 2013 and now has seven stores in total, in Paris (3), Marseille, Dijon, Lyon and Cagnes-sur-Mer, with an eighth store due to open next month in La Valette-du-Var, near Toulon. The first five stores, all of which opened in 2013/2014 marked Primark’s most successful entry into a new country, and its business in France continues to deliver very strong growth – it was Primark’s star performer in 2015.

Outside of her work at Primark, Breege has held government appointed positions on the board of a number of state companies including An Post, Aer Rianta, Chairman of Shannon College of Hotel Management, Chair of the Labour Relations Commission. She is currently a Non-Executive Director at C&C Group plc and a Trustee of IBEC.

On receiving the award, Breege O’Donoghue said: “I am proud of this distinction and grateful for it. Even if my own contribution to Franco-Irish relations seems to me quite modest, this honour is not only a reflection of the warm and easy relations that our countries have always enjoyed but gives much-appreciated recognition of the commitment shown by those who work with me in Primark, both in France and here in Ireland. If Primark’s activities help to create even more links between our two countries, there is indeed cause for celebration.”

Qualtrics, an insight platform which has its...