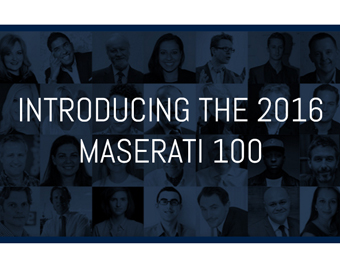 Luxury Italian car manufacturer, Maserati, and the Centre for Entrepreneurs (CFE) have announced the second ‘Maserati 100’ index; a definitive list of Britain’s most successful philanthropists, investors, mentors and advisors, and ascending entrepreneurs, who are today supporting the next generation of up and coming business talent.

The final list was curated by a panel of experts from the Centre for Entrepreneurs, including its founder, Luke Johnson. The former Chairman of Channel 4 Television and Pizza Express commented on the 2016 list saying; “Entrepreneurs have long been celebrated for their role as job creators – indeed UK entrepreneurs added 700,000 net new jobs in 2014-15 – but their deep commitment to helping others often goes unnoticed. The Maserati 100 exemplifies the economic and social value of entrepreneurs; growing the economy, creating jobs and helping the next generation do the same.”

Some of the 29 women featured in the list include:

– Chrissie Rucker, founder of The White Company; who started the company from her boyfriend’s spare room and has grown the company to 50 stores nationwide with over a £144m turnover. Chrissie was made an MBE in 2010, and in 2012 was chosen as Private Businesswoman of the Year by the Financial Times. Chrissie regularly finds time to mentor young social entrepreneurs through Expert Impact.

– Sarah Wood is co-founder and co-COO of video ad-tech company, Unruly. Launched in 2006, Unruly was acquired by News Corp in 2015. Sarah has been voted UK Female Entrepreneur of the Year by the Growing Business Awards, one of 15 Women to Watch in Tech by Inc., one of 10 London-Based Entrepreneurs to Watch by Forbes, Digital Woman of the Year by RED Magazine, and a Rising Star in Computer Weekly’s Most Influential Women in UK IT.

– Sahar Hashemi co-founded Coffee Republic – the UK’s first US style coffee bar chain – with her brother in 1995 and built it into one of the UK’s most recognised high street brands with 110 bars and a £30m turnover. In 2005 she founded Skinny Candy – a brand of sugar free sweets – and sold it two years later. She is currently mentoring young social entrepreneurs through Expert Impact.

– Neeta Patel is the founding CEO of the New Entrepreneurs Foundation – a charity which aims to develop the next generation of UK entrepreneurs through a 1-year programme which combines hands-on work experience in a high growth company, intensive training workshops and access to networks. Neeta is also entrepreneur-mentor-in-residence at the London Business School.

– Josephine Goube is one of Britain’s leading campaigners for smarter immigration policies and for women entrepreneurship. As director of partnerships of Migreat – a platform helping people through each step of the immigration process – Josephine has led a campaign to adopt (and keep improving) startup visas across Europe.