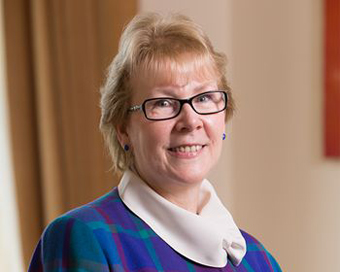 NUI Galway announced the appointment of Professor Anne Scott as Vice President for Equality and Diversity. This is the first appointment of its kind in an Irish University.

Professor Scott is currently Executive Dean of the Faculty of Education, Health and Community in Liverpool John Moores University. She has worked as an academic and academic leader in the Scottish, Irish and currently the English Higher Education Systems. She held the post of Head of the School of Nursing and Human Sciences, Dublin City University (2000-2006) where she led the development of BSc, MSc and PhD programmes in the school, in addition to founding and developing a vibrant culture of research and scholarship.

In February 2006 Professor Scott was appointed Deputy President and Registrar of DCU, a post which she held until late 2012. During this time she led many initiatives across DCU including a review of the academic promotions process; the development of the e-learning roadmap; and the graduate attributes project for the university. She has a proven track record of transformational leadership in academic environments in both Ireland and the UK, working at senior levels, to bring balance to strategic decision making and insight into the organisational culture and concerns of colleagues.

Professor Scott is an active mentor for the Aurora women only leadership development programme in the UK; she was recognised by the Women’s Executive Network (WXN) through the Ireland’s Most Powerful Women: Top 25 Awards for her leadership in public service; she has also mentored emerging women leaders and high potentials via the WXN.

This is a welcome move by NUI Galway, which was ordered to pay €81,000 to a lecturer in 2014 after she took a case against the university to the Equality Tribunal. Mary Dempsey claimed that she was discriminated against by the university on the grounds of gender, family status and disability.

PayPal has today announced the creation of...