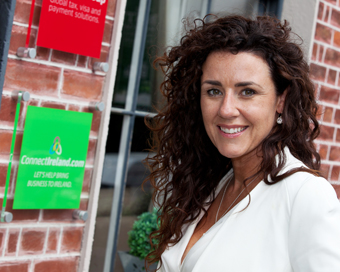 After just a few moments’ conversation, you realise Joanna Murphy is the real deal.  Entrepreneurship is in this lady’s bones. It sparkles in her eyes. It flows through her veins.

It’s no surprise that after founding and running two businesses in the construction/civil engineering supply sector, the 40-year-old is currently the CEO of ConnectIreland, a hugely successful, internationally-based jobs-creation scheme launched by the Taoiseach in 2012 to deliver the Government’s Succeed in Ireland Initiative.  ConnectIreland uses the formidable network of connections formed by Irish people at home and abroad to attract foreign companies – and jobs – to Ireland.

Over the past four years, it has built steadily on the input and support of thousands of ordinary people as well as high-profile names like Saoirse Ronan, Michael O’Leary, Michael Flatley and Peter Sutherland. It now boasts a network of some 70,000 ‘Connectors’ in 147 countries across the globe.

The result is the approval of some 2,000 jobs with thousands more in the pipeline, many of which are set to boost regional and rural areas severely affected by the excoriating 2008 economic downturn.

A pretty good performance for an initiative which is barely four years old, points out this mother-of-three, whose career trajectory started far from the orbit of Hollywood celebrities such as Michael Flatley or Saoirse Ronan.

After graduating from the Irish Management Institute with a business degree in 1999, Joanna landed an entry-level position in the financial services sector before moving on to join the workforce of a small construction supply company in Wicklow.  It was here that the twenty-something’s entrepreneurial flair rose to the surface:  “I noticed that there were gaps in how the company was being run, so I set about making small changes to improve the running of the firm,” recalls Murphy, a native of the picturesque Co. Wicklow village of Hollywood where she still lives with her husband Raymond and three children.

“These changes coincided with the boom and – very quickly because I’d implemented new structures – we started to do very well. “Within a year of joining it I was running the company.”  At this stage she was 25.

Three or four years later she left to establish her own business, MLCS, a specialist construction supply company, which catered to the civil engineering sector. “I travelled around Europe going to trade shows and finding products that were smarter, better and cheaper than what was on sale in Ireland and it became very successful – we were getting very good contracts.”

They serviced the Luas Line and Smithfield Development and the company grew and grew. In 2005, pregnant with her third child, she decided to sell MLCS, though she remained on as Sales Director until her eventual departure in early 2006.  The thinking behind her sale of MLCS was to give her an opportunity to take life a bit easier, but the intrepid Murphy was never one to allow the grass to grow under her feet.

Within a matter of months – in late 2006 – she had established another company, Protherm.  Focusing on the construction of more energy-efficient buildings at a time when the Irish construction sector was at fever pitch, Protherm became, quite literally, an overnight success:  “It quickly became an Enterprise Ireland High Potential Start-Up and was outperforming our key performance indicators all the time – business was booming, but then the downturn hit.” Protherm didn’t survive and its loss in 2013 came as a shock to the young entrepreneur. “It affected my confidence, because up to then I’d assumed everything I touched would turn to gold,” she confesses.

During a conversation with Terry Clune, the founder and chairman of Connect Ireland, she wished him luck with the initiative. “I was blown away by the ingenuity of Terry Clune, his ardent patriotism and his response to the Taoiseach’s call for Irish people across the globe to help at a time of our worst economic crisis,” she recalls now.

“Terry’s answer was in the form of ConnectIreland and it was and still is utterly inspiring.” Attracted by her business experience, dynamism and sheer enthusiasm for the jobs-creation initiative, Clune later asked her to meet with him, and in December 2013 Murphy was appointed Project Manager with ConnectIreland.

“At the end of that meeting I was convinced I wanted to be involved,” she recalls.  Being project manager effectively meant implementing ideas – which she did with fervour. She was responsible for ConnectIreland’s brand development and created and developed strong partnerships with leading global organisations such as Dublin Airport Authority, Aer Lingus and GAA.  Three months later she was promoted to Chief Operating Officer, and, last July became CEO.

“I love it,” enthuses Murphy. “I’m blown over by Irish people who go away but still don’t forget us. If we ask something of someone who loves Ireland and lives away they’re happy to do it. And that means a lot.”

There’s more than semantics to a change in...