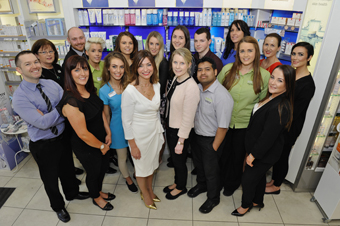 Meagher’s Pharmacy, a Dublin pharmacy chain headed by Managing Director Oonagh O’Hagan, has qualified to represent Ireland in the public voting round of the 2016 European Business Awards.

Meagher’s Pharmacy is set for further growth this year, adding two new pharmacies in early 2016 and creating 20 new jobs. Currently employing 65 people, including fourteen pharmacists, Oonagh O’Hagan plans to double store numbers within the next five years.  With dedicated hospital pharmacies included in the business expansion plan, as well as larger retail store formats, staff numbers are likely to more than double by 2020.

National entrants in the European Business Awards are independently adjudicated in the first round of the competition, based on video and written entries, with finalists then entering a second round of online public voting.

The first phase of the online voting runs until Friday 26 February 2016, and Oonagh O’Hagan, Managing Director of Meagher’s Pharmacy and former Chairman of Retail Excellence Ireland, is encouraging the business’s trade associates and customers to get behind this European award nomination.

“The Meagher’s Pharmacy staff and management team are proud to represent Ireland in this competition.  We are hopeful that people will go online and vote for our awards entry, which recognises the dedication of our staff across all six outlets, in delivering excellent pharmacy and retail services in local communities”, Oonagh O’Hagan commented.