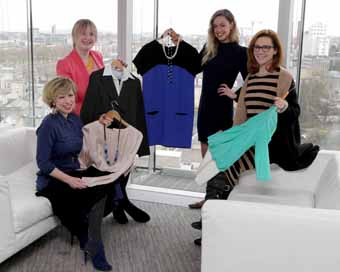 Women still face significant barriers when it comes to entering and progressing in the workplace. That’s according to Sonya Lennon, designer, tech entrepreneur and founder of Dress for Success Dublin.

Dress for Success Dublin provides women with the clothing, skills and confidence needed to succeed in the workplace. Speaking on February 7th at the launch of the organisation’s annual International Women’s Day campaign, Sonya said: “In recent decades, there have been great strides made in terms of gender equality and promoting women’s participation in the workplace. However, a lot remains to be done.”

“Women in Ireland earn only €87 for every €100 earned by men. At the current rate of change, it will take until the year 2133 for the economic gap between women and men to close. The percentage of women in the workforce here is 63 percent, compared to 77 percent of men. And the percentage of women in senior government and management positions still remains very low.”

International Women’s Day (IWD) falls on 8th March each year and, at last week’s launch, Sonya called on workplaces of all sizes to join Dress for Success Dublin’s IWD campaign to celebrate the economic achievements of women.

“We aim to break down the gender pay gap by offering individual supports to women looking to gain employment and showcasing the amazing women participating in workplaces across Ireland,” she said. “Our IWD campaign is also an opportunity for workplaces to highlight the positive steps they are taking to support their female employees and to promote gender equality.”

Get involved with Dress For Success: www.dressforsuccessdublin.org

Plato is a not for profit business...