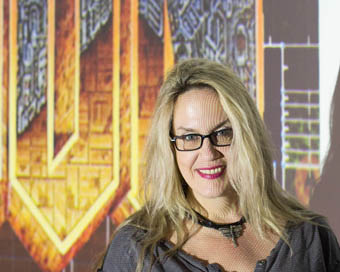 She got her first computer in 1980 at age 13; two years later she was running the helpline for a video games company.  So it’s little wonder that by age 49, the multi-award-winning games designer, businesswoman, university lecturer and Galway resident Brenda Romero is the longest continuously-serving woman in the global video games industry.

The internationally renowned game designer was recently appointed Lecturer in Games Development at the Department of Computer Science and Information Systems at Lero, the Irish Software Research Centre based at the University of Limerick.  A 2014 Fulbright Scholar and recipient of the 2015 Game Developers Choice Ambassador award, the New Yorker holds the 2013 Women in Games Lifetime Achievement award by Microsoft.

That same year Brenda was listed as one of the industry’s top 10 game developers in the world by Gamasutra.com. And let’s not forget her previous stints as the Program Director of the UC Santa Cruz Masters in Games and Playable Media Program and Chair of the Savannah College of Art and Design’s Interactive Design and Game Development department – both of which earned top ten Princeton Review rankings during her time there.

Romero was born into a rural agricultural community in Northern New York; her family, and many of her neighbours were the descendants of Irish immigrants.  “Where I grew up was not that different from rural Ireland,” recalls Romero, who says her mother’s side, for example, were O’Donovans and Hares. There was no money to splash around on computers when she was growing up – her father died when she was four, leaving her Mum a struggling lone parent at age 43.

Brenda, however, had more than a few things going for her:  “I was an inquisitive child. There were computers in me school and I liked figuring out how to make computers do things. “I think it was like the reason kids play with Lego. I think I viewed computers as a kind of digital Lego!”  And, once her hard-pressed but forward-seeing mother realised how passionate the 13-year-old was about computers, she managed to buy her one.

“We had no money at home. Our family income was very low but somehow my mom managed to get a Vic-20 computer for me.  She was an habitual reader and she knew that computers were the future.  She bought the cheapest computer she could find and she’d bring magazines home from the library so that I could type in a code from the magazines – it would run to hundreds of lines – and it would turn into a game!”

“Back then lots of people learned to code by simply typing the code from the magazine and then modifying it.  Mom was a huge believer in learning and she really encouraged me to learn about computers,” says Romero, who as a designer later contributed to many seminal games, including the Wizardry and Jagged Alliance series and titles in the Ghost Recon and Dungeons & Dragons franchises.

“I never once had a limit put on me because of my gender. Nobody ever said this was for boys or that was for girls!  I was raised never to see limitations; they were never presented to me, so maybe I was super-lucky.”  Two years after getting that home computer, the 15-year-old landed any teenager’s dream after-school job – staffing the hotline for a games company in the then-fledgling video games industry.

The game was Wizardry; the company was Sir-Tech, and for the adolescent Romero the job incorporated everything she loved most – spending hours on a computer, playing a popular video game, learning how it ticked – and talking on the phone to other enthusiastic players for four hours a day.  “I had access to a computer all the time and I got the opportunity to be on the ground floor of an amazing industry which was starting in my home town!”

She graduated from college in 1989 with a degree which she describes as “a sort of hybrid of coding and writing,” and continued to work with Sir-Tech for two decades, navigating her way to becoming a designer on its best-selling Wizardry series.  “With video games I’m using code, art, maths and history to create an entire experience. I was interested in using it to create immersive experiences – I wanted to create worlds, whole groups of people and give players experiences that they would remember,” she recalls.

After leaving Sir-Tech in 2001, Romero worked with a variety of well-known companies, including Atari, as a games designer before joining the Savannah College of Art & Design to teach Games Design.  However, fascinated by the new-generation social games she was later tempted back into the industry and then she and her husband John launched their own successful game:  “I created a game called Ravenwood Fair with my husband John, which did very well. It had 25 million players monthly at one time.”

Its success encouraged them to set up a company, Loot Drop, in 2010, which worked on a variety of different games.  Things moved quickly after that – in 2014 Romero won a prestigious Fulbright scholarship to study the Irish games industry in conjunction with an initiative by Bob Jackson of the Institute of Technology in Tralee:  “I was in Ireland for two and a half months visiting a number of colleges, including IT Tralee and the University of Limerick, giving workshops, reviewing their existing curriculums and making suggestions.”

She and her husband liked Ireland so much that they wound up Loot Drop and moved to Salthill in Galway in 2015 with their four youngest children, where they set up a new company, Romero Games.

Now on the staff at the Department of Computer Science and Information Systems at Lero, Romero is excited by the potential the games market – currently estimated to be worth more than €90 billion – offers Ireland: “The natural creative and technical talent that Ireland is renowned for in software, animation, music and literature is a resource that is key to developing world-class games.”

Or in other words, if we Irish continue to exploit our potential in this sector, the future’s so bright we’ll have to wear shades…

After just a few moments’ conversation,...

A few years ago, the American city of...