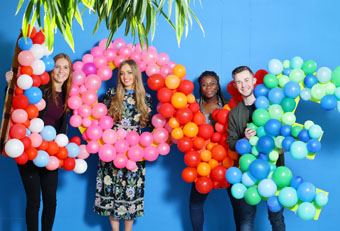 Ulster Bank and Young Social Innovators (YSI) announced a new partnership at an event in The chq Building yesterday.

Over 200 people gathered to hear from a host of speakers including An Taoiseach, Enda Kenny TD who spoke about the important role that social innovation has to play in developing an economically stronger society. The event was MC’d by Diana Bunici, TV presenter and author.

Young Social Innovators is the biggest civic and social innovation programme in Ireland, educating and engaging young people in the theory and practice of social innovation whilst  challenging them to creatively tackle the social issues facing them locally, nationally and globally.

Through their new relationship, Ulster Bank will provide financial support to YSI and its participants, ensuring that social innovation in Ireland continues to be fostered from a young age. A record breaking 444 innovation projects have been entered into this year’s ‘Young Social Innovators of the Year Awards’ by over 6,500 students nationwide, an increase of 8% from 2015. Across its programmes, YSI is currently accessed by approximately one in ten students throughout Ireland whilst it works to grow its interest and activities in Northern Ireland, Canada and Zambia.

Speaking at the event, Sister Stanislaus Kennedy, co-founder of Young Social Innovators, called on companies not to forget their social responsibilities as they focus their energies on innovation for economic growth.  “Innovation for its own sake is not enough. We have seen all too often in Ireland and elsewhere innovations which benefit a few but are harmful or are out of reach, to many. We need social innovation to be an integral part of innovation so that we build a more equal, inclusive and sustainable society – that is what social innovation can bring to us.”

The Taoiseach and Minister for Jobs launched...

8th Cycle of Going For Growth...