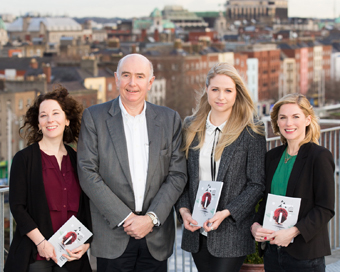 Bord Scannán na hÉireann / Irish Film Board (IFB), the national development agency for the Irish film, television and animation industry, today published details of all IFB supported productions coming to audiences in 2016 and detailed its priorities and ambitions for the year ahead.

In a year which has seen IFB supported projects experience unprecedented success in terms of international critical acclaim and audience engagement, IFB Acting Chair, Dr. Annie Doona outlined the need to restore funding levels to ensure that momentum can be maintained.

She also discussed how audiences around the globe engaged with Irish stories in film this year. Impressive international sales and box office figures were experienced across the board with Irish films estimated to have taken approximately US$52 million at the international box office.

The overall figures for the industry show that high production levels continued through 2016 with production activity for the independent film, television drama and animation sector coming in at just under €200 million.  The Irish film sector employs some 6,000 full time employees in Ireland and is estimated to be worth in excess of half a billion in turnover annually.

Female industry members and Irish productions, which are being widely celebrated during the awards season, include:

– Saoirse Ronan won a number of best actress awards and nominations for her role in Brooklyn – at the Moet British Independent Film Awards, New York Film Critics Circle Award, and a BAFTA and Golden Globe nomination;

– the Audience Prize for Room for the Best Feature Film in the Toronto International Film Festival – the screenplay for which was written by Emma Donoghue, the Irish author of the book;

Dr Annie Doona said: “The deserved international recognition and success of Irish stories on film will have a very positive knock-on benefit for Ireland, Irish culture and the Irish economy as a whole. However, the projects that are enjoying international acclaim today have been in the pipeline for a number of years. In five years’ time we won’t have the same level of success unless funding for the sector is restored to previous levels. Funding is down 40 % from 2008 and needs to be restored in order for the sector to fully realise its economic and cultural potential.”

33 of the best small businesses in Ireland,...