EY Entrepreneur Of The Year Launches 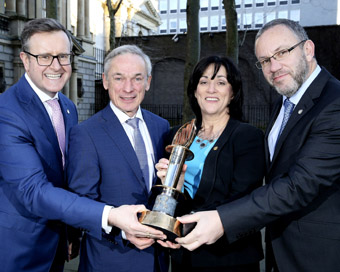 The EY Entrepreneur Of The Year™ (EOY™) 2016 programme officially opened for nominations today, kicking off this year’s nationwide search for Ireland’s leading entrepreneurs. The theme of this year’s programme centres on ‘creating your business legacy’ and is open to entrepreneurs across all sectors.

Operating in more 60 countries worldwide, EOY™ has evolved over the past 18 years into a ten month development programme connecting the best entrepreneurs across the island of Ireland.

The programme is open to entrepreneurs across all sectors and growth stages, from the Republic of Ireland and Northern Ireland. The awards programme is divided into three categories – Emerging, Industry and International – with eight finalists chosen per category. The 24 finalists will be selected by an independent panel of judges, comprised of former EOY™ winners and chaired by Anne Heraty of Cpl Resources plc.

Individuals who wish to put themselves forward or nominate an entrepreneur with their consent, can fill out the online nomination form at www.eoy.ie or call the EY Entrepreneur Of The Year™ team for further information on 01 221 2250.  The deadline for nominations is Friday 29 February 2016 with the 24 finalists announced in April.

8th Cycle of Going For Growth...

Pension Ownership Up But...