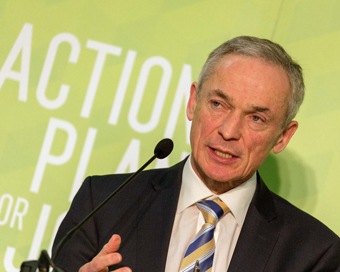 The Taoiseach and Minister for Jobs launched a €40 million competitive regional jobs fund today as part of the Regional Jobs Plans process.

Details of the Enterprise Ireland fund were revealed ahead of a meeting in Athlone with 20 business people from across the country who have been named as Enterprise Champions, responsible for helping to implement the Regional Jobs Plans in each area of the country.

Seven of the eight Regional Jobs Plans have now been published, covering every area of the country except Dublin, with publication of the final Dublin plan scheduled for the coming weeks. Together, the eight jobs plans are aimed at creating 220,000 extra jobs across the country over the coming years, which specify targets for each region aimed at ensuring that the unemployment rate in every region is within 1% of the average across the State.

In order to win funding under the scheme, a project must involve collaboration from different players within each region – for example Local Authorities, education institutions, State Agencies, as well as private sector bodies like Chambers of Commerce. The thinking behind the €40 million fund is that it will help incentivise these organisations to work together on a regional basis in the interests of job-creation.

The Taoiseach and Minister Bruton will today encourage the Enterprise Champions (who will help drive the implementation of the regional jobs plans) to come back with innovative proposals to support job-creation in their regions, and to promote collaboration between the different stakeholders.

The €40 million fund will be rolled out on a phased basis, grouped under the following five themes:

o        Strengthening Third-level as a driver of regional enterprise

This competitive initiative marks an innovation in funding enterprise projects. Minister Bruton believes that by making the funding competitive, it will bring the best out of the organisations in each region, and incentivise the greatest possible level of innovation and collaboration locally.

33 of the best small businesses in Ireland,...