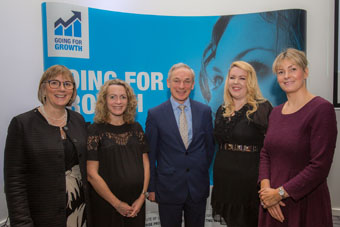 Richard Bruton TD, Minister for Jobs, Enterprise and Innovation launched a new cycle of the Going for Growth Initiative at the Marker Hotel, Dublin last week.

Sponsored by Enterprise Ireland and KPMG, the award winning programme will support 95 female entrepreneurs to grow their businesses over the next six months. Drawn from across Ireland, between them these ambitious female entrepreneurs already have annual sales of €58 million, 1,060 employees and 43% are currently exporting.

The participants aim to significantly increase their turnover and expect to make considerable additional economic impact in terms of jobs creation and export sales over the next few years. Going for Growth was recently announced as the Winner of the European Enterprise Promotion Award 2015, investing in entrepreneurial skills.

Its National Director Paula Fitzsimons won the Boots WMB Empowering Women Award 2014 for her work with Going For Growth.

EY Entrepreneur Of The Year...