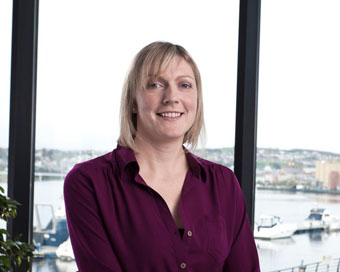 Trick question; what’s the link between the science of, say, yoghurt-making and the logistics of managing an election via the internet? Answer: There is none. Yet, strange as it may seem, for Siobhan Donaghy, who now heads up a dynamic company providing electoral software to the political sector, one somehow led to the other.

The 39-year-old from County Antrim spent several years studying Food Science at Queen’s University in Belfast before earning a Master’s Degree in Environmental Science.  “I loved food science,” she confesses. But on finishing university, she still wasn’t done with the books: “When I came out of college, I wanted to continue my studies, and I wasn’t sure that I wanted to enter the workplace.”

So with a few years of university already behind her, the 21-year-old signed up for a six-month course in programming and databases.  And that, it seemed, was that for the food science: “Straight afterwards I got a job as an IT programmer and started designing websites and setting up databases.”

She worked in this area until about 2002/2003,  when the owners of the company she was employed by, set up a new business, Opt2Vote: “I moved across to Opt2Vote as a software developer – I was one of the programmers on the project.” The software she was working on, she recalls, offered people the opportunity to vote online in the British electoral system. “It was one of a number of pilot projects on which we worked, and it was a great success.”

“Opt2vote started looking at applying technology to elections and understanding how it could be used to improve the electoral process.” Siobhan was promoted to Chief Technical Officer, staying on with Opt2vote after it was acquired in 2012 by another company – which promoted her to Head of Commerce. “I’d come from being a developer to being a project manager and very customer oriented,” she recalls. Donaghy remained with the company until May 2014, when she left to set up her own firm.

That July, she launched Modern Democracy, a company which delivers processes designed to meet the needs of the voter. The firm also offers a comprehensive range of services and consultancy packages to help electoral services professionals manage supplier information and reduce supply chain risk, as well as helping suppliers to manage compliance, improve their performance and efficiency. “I’d worked in the elections industry for so many years that I understood the changes that were happening,” Donaghy explains.

“I could see that elections, which are very paper-based – from the vote itself to how election managers manage them – was very paper-based.” Donaghy observed other sectors were embracing tablet and mobile technology to make things easier, and she felt the heavily paper-based elections process was preparing for a change – and this, she felt, posed an opportunity: “I felt the electrical system had already begun evolving. There was legislation in the UK where people could register online.”

She was able to see things from the perspective of election managers as a result of working with them. “I could see how technology could really help them deliver their services more efficiently,” she says, pointing out that an eye-watering 30% of any election budget is typically spent on paper and postage. “That’s a massive amount of money,” she says, adding that the area is constantly being ‘squeezed’ for resources and budget.

“Technology is a way that you can deliver the service much more efficiently and at a lower cost.” The idea of Modern Democracy, she explains was to confer with election managers and help with the electoral process. From there her company developed a digital platform for elections.  The basic idea is to replace the traditional paper-based electoral process with efficient – and cheaper – digital technology.

“Sheffield City Council, for example, recently had 200 polling stations open all day for its elections.” On the day, she explains, the election manager needs to be certain that each polling station is up and running smoothly. “We provide tablet technology for each of these polling stations. The electoral manager can check in real time to see if they are all up and running and working effectively.”

It means, she explains, that the manager doesn’t have to put additional staff in place to phone or visit each centre in order to check they are all operating effectively. “Sheffield used this technology in October 2014 and it was very successful. They have now signed up to use it for the next three years,” says Donaghy, whose Derry-based company now employs seven full-time workers.

She plans to extend the service further, adding additional models which could distribute polling cards or information about an upcoming election direct to voters’ phones. “We currently provide for the dissemination of candidate’s information as well as information regarding political parties to peoples’ mobile phones.” This means it’s possible to give “real analytics” on how many people have actually accessed the information, she points out.

It’s about trying to engage the electorate and communicate directly to people who are used to receiving information by phone. “The electorate is changing. The system must change to meet its needs. Local authorities need to have the ability to disseminate information digitally as well as through the conventional paper way,” she declares.

This is particularly important for young people – the demographic which political parties are targeting. To engage young people in the electoral process, it’s important to make information available through digital technology as well as through the traditional paper format – and this, she points out, is where she comes in!