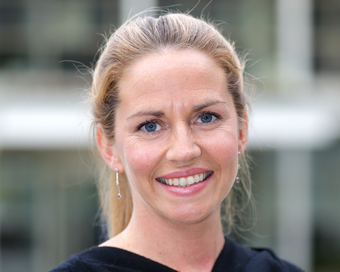 The year 2015 was one that Olive O’Driscoll will look back on with great satisfaction in the years to come – not only did her fledgling company win the most prestigious award in its sector, it also attracted some €1.3 million in funding.

She could never have imagined, way back in the mid 1990s, when she was studying sports science at University of Limerick that one day she’d be the co-founder, and chief executive of a firm on the brink of international success.

However the degree was an eye-opener in a way she hadn’t imagined – it demonstrated where O’Driscoll’s real interests lay; not in sports science per se, but in the scientific or clinical aspects of sport and, in particular, in biomechanics. After earning a Masters’ Degree in Biomedical Engineering and Medical Physics in the University of Aberdeen in Scotland, the young Cork woman landed the first of a number of coups – in 2000 she secured one of just four available places on a special NHS programme for trainee biomedical engineers.

A year later she was a qualified clinical scientist with the Institute of Physics and Engineering in Medicine. A number of jobs continued – she worked for a Canadian firm making cardiovascular medical devices. Based in the UK, she was a member of the company’s European team. Two years later O’Driscoll began work with the Department of Surgery at University College London on a large international clinical trial on breast cancer involving 2,000 patients  testing a new radiotherapy device for breast cancer.

That lasted 24 months, after which she joined a London-based start-up producing a diagnostic medical device for osteoporosis – Olive was involved in the clinical trials for the product. Next came a position on a large pharmaceutical trial with Cancer Research UK in London – the ambitious young scientist came aboard as project manager of a pharmaceutical study involving 10,000 patients, overseeing the trial in 200 centres in some 30 countries around the world.

In 2009 she returned to her native city after hearing that Enterprise Ireland and Cork Institute of Technology had established a new medical device development centre: the Medical Engineering Design and Innovation Centre. Olive landed a position as technical project manager. “People from industry were coming back into academia to develop new products,” she recalled. “It was exactly what I’d been doing for other companies over the years,” says O’Driscoll, now 37.

It was, she decided, the right time to establish her own start-up. She and her business partner John Vaughan, a fellow biomedical engineer and now the company’s chief technical officer, had spotted an opportunity to develop a device for placing grommets in children’s ears without the use of a general anaesthetic and in 2013, their company AventaMed, was born.

“Grommets are little tubes that go into an incision in the ear drum. The grommet ventilates a space in the middle ear, which reduces fluid build-up and helps prevent infection”. She and Vaughan came up with a less invasive product which is quick and does not require a general anaesthetic. And that’s a big advantage because up to 1 in 15 children under the age of seven undergo the procedure, which at the moment takes place under general anaesthetic.

With €400,000 in financial support from Enterprise Ireland and CIT they developed the product from scratch, built a prototype and got feedback from surgeons. The reaction to the hand-held device, which allows a consultant to insert a grommet in an ear in a few minutes, was very positive, she says. “It was seen as a product with huge commercial potential.”

They were successful in attracting more funding to finish their testing and secure the relevant regulatory approval in the US and Europe and start trials – last September €1.3 million was raised through Enterprise Ireland and the Halo Business Angel network. “Since then we have grown our team. We now have six employees, three full-time, and are based in the Rubicon centre.”

O’Driscoll and Vaughan now also have a number of awards under their belts – in early December the duo was awarded the Irish Medical Device Associations award of Emerging MedTech Company of the Year 2015: “That’s a very prestigious award, and it’s the biggest award you can get in the industry. We are delighted”.

The IntertradeIreland Seedcorn Competition in November 2014 was another coup – that secured the company €100,000 in funding. “We’re starting to trial the device in Europe and the US in early 2016,” she explains, and adds that it will be tested on a group of paediatric patients in three hospitals around Europe and the US. “After that we expect the project to be fully approved and we’ll launch it commercially.”

It looks set to be a winner – more than two million children annually require the procedure, and the global market opportunity is estimated to be worth more than $5 billion. O’Driscoll makes an effort to mark the ‘happy’ occasions, she says: “It’s important to take stock of the good times and to remember them!”

Trick question; what’s the link between...

The 80-metre long oven has been installed,...