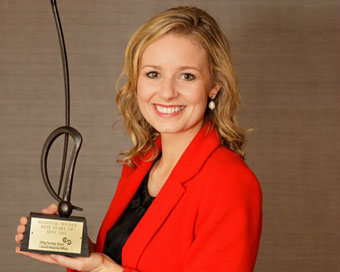 The national winners of Ireland’s Best Young Entrepreneur (IBYE) contestants were announced yesterday at The Foundry, in Google’s Dublin HQ.

Isolde Johnson (pictured), co-founder of Cool Bean Company, won the Google award for ‘best online promotion of business’. She competed in the Dublin regional rounds before pitching to the judges one last time on the day. Isolde was also shortlisted for the WMB Awards 2015.

The awards are run by the Local Enterprise Offices across Ireland with each region conducting a local competition before progressing to the national final. Nearly 1,500 young entrepreneurs competed for the prize fund, which amounts to almost €2 million overall.

This was the second year of the nationwide competition, which is open to entrepreneurs aged between 18-30. For more information, visit the website: www.ibye.ie