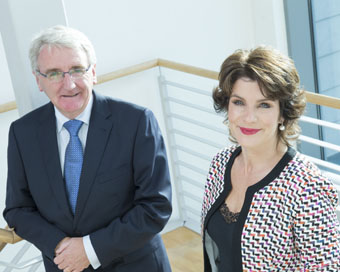 Fiona Foley, Managing Partner of the new firm Foley Turnbull Solicitors, began her legal career more than twenty years ago under the mentorship of Val Turnbull at Barry Turnbull & Co. The two (pictured) have united again and from today will run the new law firm from their offices in Ballincollig, Co. Cork.

Announcing the merger Fiona Foley said: “I am very pleased to once again be working closely with the highly respected firm of Barry Turnbull & Co.  In the past five years notwithstanding the economic downturn, we have seen year on year growth averaging at 20%. Our client base has more than doubled and turnover has increased requiring our business to expand to meet demand.  It was an obvious choice to join forces with Val (Turnbull) who has almost 40 years experience and who has been a trusted colleague and friend since I began working with him soon after qualifying 20 years ago.”

She continued: “We are a modern law practice who pride ourselves on delivering a personalised service and are wholly committed to client care. Barry Turnbull & Co. share the same values and have been established in Cork since 1964 and bring with them a wealth of wisdom and experience”.

The Mary Robinson Centre – dedicated to...