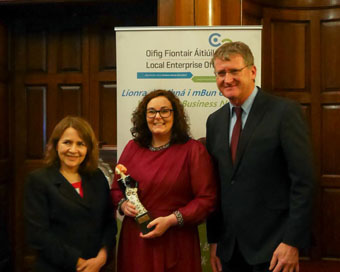 The Dublin city Local Enterprise Office (LEO) held its Christmas Networking event on December 14th in the Irish House of Lords, Dublin. On the night awards were given in two categories to member businesses.

The winner of the LEO Dublin City Women in Business Network ‘High Potential’ Female Entrepreneur of the Year Award 2015 was Niamh Herrity of Pink Kong Animation Studios. Niamh featured in our Women Who Launch this month, along with business partner Aoife Doyle. Niamh received a Perpetual trophy, €1000 cash and €500 LEO Dublin City voucher.