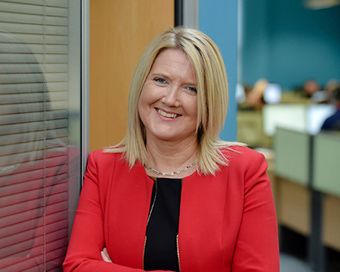 Angela Canavan has been appointed by Civica as Managing Director of its Digital Solutions Ireland team.

In that role Angela had direct responsibility for the company’s operations, as well as ensuring the operational excellence of all services delivered by the company. She also championed Corporate Social responsibility within the organisation, as well as overseeing Continuous Professional Development, Work Life Flexibility and Employee Engagement.

After graduating from Queen’s University Belfast with a Computer Science degree, Angela developed her experience in the ICT sector with a number of software engineers needing and management roles for companies including Kainos, BT and Fujitsu.

She has a particular interest in skills development within the ICT sector in Northern Ireland, this interest has resulted in her joining the Northern Ireland E-skills Employer Board and becoming an Ambassador for BringITOn campaigns.

Angela took up her new role in November 2015, taking over the reins from Steve Brankin.

Kinetic Ireland, the Out of Home (OOH) media...