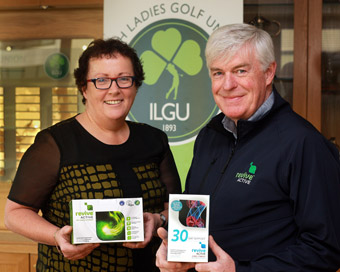 The deal will see Ireland’s fastest growing health supplement business become the title sponsor of the ILGU National Fourball for a three year period, beginning in 2016 and running through until 2019.

With more than 41,000 active female golfers, the Fourball is the leading inter-club fourball event for lady club golfers in Ireland. Established in 2004, it is also one of the most popular fixtures in clubs across the country and is open to all members of affiliated golf clubs who hold an ILGU handicap.

Irish Ladies Golf Union Chief Executive, Sinéad Heraty said: “The ILGU is delighted that Revive Active has committed their support by coming on board to sponsor the ILGU National Fourball, which is one of the leading events at club level for amateur female golfers.  We are extremely pleased about this sponsorship agreement and believe the company brings an exciting calibre of expertise in the health & nutrition arena and we are very much looking forward to working with Revive Active to help them develop their brand association with the ILGU through this sponsorship and beyond.”

A big leap in the number of start-ups is...