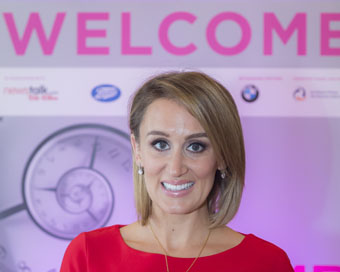 Few wildly successful entrepreneurs can claim to have launched their business in the laundry-room of a student ‘party’ house. But that’s Marissa Carter for you.

The  young Dubliner was only 21 when she established her fledgling beauty salon in the house she was renting together with four highly sociable male students. After training as a beautician, Marissa left her job in January 2006 to set up  her own salon – in the laundry-room of a house she was sharing with four college boys, one of whom she ended up marrying. “It was a total party house and all the neighbours hated us,” she recalls now.

Five months later things were going so well that she moved to her first commercial premises. Again humble beginnings – she rented out the upstairs break-room in a hairdressers’ salon. “It was my first commercial premises,” she recalls fondly.  “I had a small bank loan and some savings and business went really well.” So well, in fact that she won the Facial Therapist of the Year Award with the Irish Beauty Professionals Association  in 2007, and  this precipitated another  move, this time to a much bigger premises on the ground floor in Dun Laoghaire.

“I doubled in size and the business grew.” But then, as we all know to our cost, the hammer-blow of recession landed on Ireland. Business started to decline. Marissa moved again – this time to a good location on the main street in Blackrock – and changed her business model.
“I had been focusing on facials and advanced skin care but people stopped spending money on facials so I looked at my business models and refocused on treatments that were fast and inexpensive.”

She started prioritising nail, waxing and tanning treatments: “These were treatments which were perceived more of a necessity and less of  a luxury – that and my location saved me,” she recalls now. However, there was one concern – the cost of the spray tan, at €75 a litre was prohibitive. “I’d get 10 sprays out of it. We were charging about €35 per customer for a spray tan, and at the time I was doing about 120 spray tans a week. My overheads were so high I needed to find a better way  because I needed more margin to meet my overheads.”

From a business perspective it simply did not make sense  to keep  buying tan at €75 a litre. Back in 2007 Marissa had done a nine-month course on cosmetics chemistry and skin histology – something she was extremely passionate about. “I was always interested in the manufacture of cosmetic products.” However, she says, it wasn’t until now that she realised that she really needed to look into the possibility of producing her own spray tan solution: “And anyway I could never find a tan that I was 100% happy with!”

The course came in handy. She started working with a cosmetic chemist in the UK: “We got working on  a formula  and in 2011 we came up with the formula and a spray tan solution.” She started to use her Cocoa Brown tan in her salon and it was extremely popular – so much so that she quickly decided to take a chance and see how it would fare out in the retail sector.

“It started out as mousse in a bottle that you can put on with a special mitt,” she explains. Cocoa Brown hit the shelves in November 2012 and was an overnight success: By March 2013, approximately 97% of Irish pharmacies and over 300 beauty salons stocked the brand.  In April, Cocoa Brown became available in Penneys Ireland. By July, the products had entered the UK market and are available in Superdrug and Lloyd’s Pharmacies.

Cocoa Brown is now available in the USA and Australia –  Marissa  recently secured a listing with retail giant Wal-Mart, which will see her products widely available across the States. Is it any wonder that this dynamic mother-of-two not only  won the IMAGE Magazine Start-up of the Year Award in 2013, but has recently been named the WMB Female Entrepreneur Award 2015 Winner?

“We now have 10 products on the shelves – gels, mousses, scrubs, moisturisers,” says the 32-year-old who sold her salon in 2014 to her salon manager, and concentrated on being the Managing Director of the rapidly growing Cocoa Brown company which employs four people in Ireland and one in the UK.

“The range is manufactured in the UK,  but I think as the business grows we will manufacture in the US as well as in Australia and Europe.” The future’s so bright, in other words, that this young businesswoman has to wear shades!

Who will you nominate for the WMB Female Entrepreneur Award 2016?

Sisters, as the old Eurythmics hit goes, are...