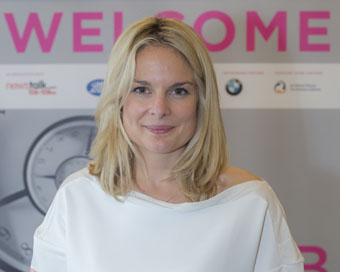 Julie Currid’s CV reads like a how-to-be-a-success manual – three years after she and business partner launched a small business in a Dublin garage, they’re running a successful international company.

Almost as soon as Initiafy was established by Currid and her business partner Sean Fennell in a converted garage at Fennell’s house, the company experienced phenomenal growth.

Initiafy, which provides a service  allowing for the online induction of contract workers before they start their jobs, was established in 2012 with just two employees – Currid and Fennell. The company now employs 25 people across three offices in Dublin, New York and Toronto.
So how did it all come about?

After graduating from Dublin Institute of Technology with a BSc in Management and Marketing, Currid spent several years in sales and marketing roles in a variety of firms in the cosmetics, media, international food sectors before taking a year out to travel. After returning to Ireland in 2010, the Dubliner landed a sales and marketing position with an online company which provided safety training.

“I later moved to London with that company and worked there for two years,” she says, adding however, that during her time with the firm, she and the then company Managing Director, Sean Fennell, “kept seeing the same opportunities arise in the area of induction”. In other words, they’d spotted a niche.

In 2012 the dynamic duo filled that niche – and they’ve been growing on both sides of the Atlantic ever since. A construction company, for example, routinely has hundreds or thousands of contract workers arriving on-site, explains, Currid,  33, and now Initiafy’s Chief Operations Officer. “Companies are obliged to deliver a safety induction course to these workers – and the way they were delivering it”, she says, “was in a traditional, face-to-face, classroom-style environment”.

This was an unwieldy, time-consuming system which could also be inconsistent because of the fact that different trainers would inevitably deliver a different quality of training. The system also caused productivity issues as a result of new workers coming onto a construction site and having to fill out paperwork and spend time attending the induction course – all of which, Currid and Fennell rightly believed, could be delivered via an online platform.

So they set up their company to offer what turned out to be a very popular service: “The way it works is that the customer would have a construction site.  There might be 100 companies sending contract workers to the site,” Currid explains. “Our client logs on to our site and uploads the list of sub-contracting companies with which it is dealing. These companies are then automatically contacted by the platform. A special code is provided to individual workers, who are then instructed to self-register and self-induct online.”

Under the system operated by Initiafy, companies prepare their own induction courses and registration pages. Initiafy simply provides what Currid calls “the empty vessel which is cloud-based and online.” Now in operation for three and a half years, it has a solid stable of clients who routinely employ contract workers – usually in the construction, oil, gas, energy, utility, retail and hospitality sectors. “We set up the company in 2012 in a converted garage at the home of my business partner Sean Fennell.”

The company experienced fast growth. In fact, the duo’s business plan attracted a healthy €1.4 million investment from a mix of sources; Enterprise Ireland, angel investors – investors who are prepared to invest in very early-stage companies – and a group of Irish venture capitalists. “We currently employ 25 people in an office in Temple Bar, an office in New York and an office in Toronto, Canada, which we opened in recent weeks.”

“It’s very exciting, very challenging – there’s always the unknown factor and you do have to be quite adaptable to deal with the different stakeholders involved; customers, employees and investors,” says Currid. “We’re both based in Dublin and we have a sales manager in New York. The plan is to continue with our fast-paced growth and to increase our focus on North America.”

It quickly became obvious that the revenue from their American-based office was growing fast, she recalls, adding that the US business now accounts for some 60% of company revenue: “There is  a huge opportunity in the US,  particularly in the construction sector, because there’s a lot of growth in the States at the moment. We’ve been working very closely with a lot of companies over there to fine-tune the product to suit the US market.”

Winning the Sodexo WMB Female Newcomer Award 2015 was, she says, the icing on the cake: “I was delighted to win the award. It was great recognition for a young, rapidly growing company.”

“Sean and I are passionate about encouraging more women into the business and we challenge event organisers and company boards to step up and make sure they’re including women on their boards and that they are inviting women to speak at corporate events. We deal in heavy industry where is a much greater challenge to increase the number of women, but there’s a place for them. Research shows that bringing women to the table increases revenue because they offer a fresh perspective and can often see new and potentially lucrative angles in business.”

Who will you nominate for the Sodxeo WMB Female Newcomer Award 2016?

The WMB Woman in Technology...

In corporate-speak, Michaela Blott is...