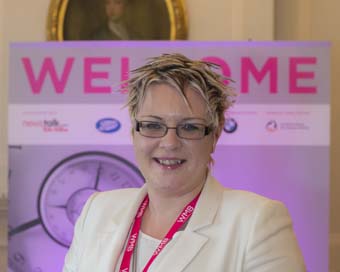 Sisters, as the old Eurythmics hit goes, are doing it for themselves and Caroline O’Driscoll is living, breathing evidence of the sheer truth of these popular lyrics.

A tax lawyer by profession – Caroline provides corporate and international tax advice to multinational companies – she has a driving passion to encourage more female students to take up subjects like science, technology, engineering and maths (STEM).

In her day-job as a partner at KPMG, O’Driscoll advises high-growth indigenous companies, particularly in the technology sector, as they rapidly expand their business within Ireland and into international markets. It was that very move into the area of IT – she now sits on KPMG’s National Technology Group which leads the firm’s strategy in this sector – that originally led to the establishment of her popular  ‘I Wish’ campaign.

Last year O’Driscoll  co-founded ‘I Wish,’ a not-for-profit organisation to inspire women in STEM, because, as O’Driscoll and many others are increasingly pointing out,  female participation in the STEM sector generally is worryingly low. Through her involvement with  it@cork, a member-driven organisation representing the interests of ICT professionals in Cork, O’Driscoll couldn’t help noticing what a heavily male-dominated sector it was: “At the time, companies were telling us we needed to increase the throughput of IT graduates into technology. When I looked at why there didn’t seem to be enough graduates in technology, I saw there were very few women in it.”

Effectively, she realised, employees were being drawn, quite literally, from only about half the population. “I thought we needed to look closer at this issue” she says. So when Gillian Keating,  then president of Cork Chamber of Commerce, sent her an email to which she had attached a thought-provoking newspaper article about coding and women,  O’Driscoll was happy to meet with her. Ruth Buckley, head of ICT in Cork City Council joined that 2014 round table session.

About  1,000 Transition Year students attended the one-day event which included opportunities to meet female engineers, scientists, technicians and social media managers and discuss what they did in their careers. The results were hugely satisfying. Following the event, 60% of teachers whose students had attended the I Wish conference, revealed that their pupils switched their subject choices as a result of attending the conference – changing over to STEM subjects like physics and chemistry, which they hadn’t previously considered taking to Leaving Certificate level: “The aims of I Wish were to show girls they had choices to make –  that there was a world of choices if they wanted to take the chance and change the status quo.”

Such was the phenomenally positive feedback to the 2015 event, that next year’s conference, which will take place on February 11th and 12th 2016, has been expanded to a two-day event  facilitating 2,000 students. And in 2016,  first-year students will be welcome to attend, says O’Driscoll, now Vice Chair of  IT@Cork: “Schools are welcome to bring first year students to the 2016 event, in which there are four sessions a day facilitating 250 girls at each.” She says, adding that parents are also invited.

And parents should come – it would be worth their while says the Ovens native and mother-of-one: “We did a survey recently of 100 companies, and 84% of them were either in the processing of innovating or planning to innovate next year. These innovations are all largely based on technology so if  I was a parent trying to advise my daughter it seems like a no-brainer that this is where the jobs are.”

The Boots WMB Empowering Women Award 2015, she says, “was a huge validation of the work I do with I Wish and It@Cork. It’s voluntary work, which is outside my job and this kind of validation encourages you to keep going. Parents must remember that the jobs our daughters may be doing in the future do not necessarily exist today.”

Who will you nominate for the Boots WMB Empowering Women Award 2016?