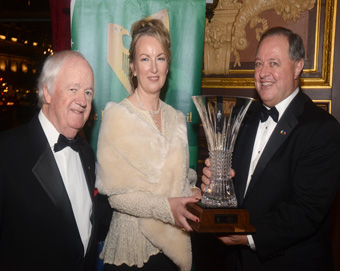 The Ireland-US Council presented its 2015 Award for Outstanding Achievement to Siobhán Talbot, Managing Director of Glanbia, in recognition of her leadership of Glanbia’s significant contribution to enhancing the economic relationship between the United States and Ireland.  The award was the centrepiece of the Council’s 53rd Annual Dinner in New York City on 12th November last.

The Ireland-US Council, founded by business leaders in the US and in Ireland in 1962, is now the premier transatlantic business organisation that encourages and promotes business between Ireland and the United States.

The award marks Siobhán Talbot’s notable and important achievements in building the business bonds between America and Ireland. In receiving the award Siobhán Talbot spoke of the parallel journey of the Council, Ireland and the US, and Glanbia since the Kennedy visit in 1963.  Documenting the evolution of Glanbia, she applauded people of vision who broke the mould, looked outward, and saw opportunity.  “Today Glanbia is an exciting place to be.  I am proud to lead an Irish based global nutrition company of 5800 employees with a footprint in 34 countries. We are hitting the megatrends of nutrition as people focus on active and healthy lifestyles, seek protein, and exert a powerful consumer focus on where their food comes from.”

Her remarks emphasised the significances of the behind the scenes efforts of people on both sides of the Atlantic to instil the sense of opportunity, particularly in young people, where she cited the Council’s Scholarship programmes role in building new leaders.

Cool Beans Launch In The UK...

The Cool Bean Company announced their...

Women Paid Less Than Men In...