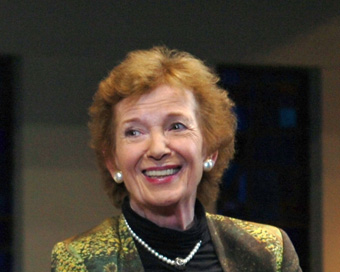 The keynote lecture was part of the activities hosted by the new centre, which will be Mary Robinson’s Presidential Library and acrhive in her former family home in Ballina, Co Mayo.

The Second Annual International Human Rights Lecture was attended by 900 people and delivered by Mary Robinson’s fellow member of the prestigious and influential Elder group, humanitarian Graça Machel.  Other activities included a workshop of 70 NUIG and other students, lecturers, historians and migrants putting a ‘Spotlight on the Migrant Crisis’.

The lecture at St Patrick’s Church, Ballina was followed by a question and answer session involving guest speaker Graça Machel and Mary Robinson and was moderated by broadcaster Olivia O’Leary.

Mary Robinson will celebrate the 25th anniversary of her inauguration as Irish President on Thursday on December 3rd.  Mary, who is also President of the Mary Robinson Foundation – Climate Justice and the UN Special Envoy on Climate Change, travels directly today from Ballina for the COP21 UN climate negotiations, the hopefully landmark summit in Paris.

Whitewater Is Best In County

The Whitewater Shopping Centre won the...