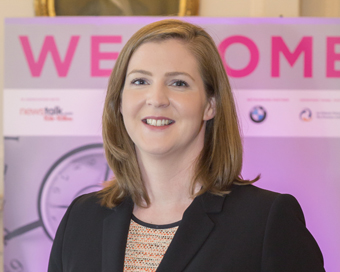 Pay it Forward was the theme of our recent Annual WMB Conference & Awards 2015 and, with dazzling synchronicity, the personal motto of one of our winners.

‘ Pay it Forward’ is all about the power of one individual to make a small and positive change, to simply look over their shoulder and throw some much-needed help and advice to someone further down the ladder.  It’s a simple concept; yet not everyone quite grasps it.

But this 35-year-old Dubliner does. The first ever female General Manager of tech giant Dell’s Irish operations, Niamh Townsend was the recipient of The WMB Businesswoman Award 2015.  And she was genuinely pleased to see her personal motto as the theme of the awards – Pay It Forward, recalls Townsend has been her philosophy since she left college and started out on her then-fledgling career.

It’s partly due to an innate “coaching mentality” she confesses, but it’s also rooted in a deep sense of personal responsibility: “Anything I enjoyed doing I wanted to show to others how to do it to. As I became more senior, I felt my responsibility strongly.”

“This was not only about sharing my journey but also to show how to navigate some of the situations you might come across in corporate life,” she explains. Her ‘throw down the ladder’ philosophy is available to all staff; male and female, she says.  “It’s to anybody I work with.  When you’re new – even new to a situation – you could already be in the organisation, but it might be your first time navigating a particular situation, it’s important for others to be aware of people in that position.”

It’s not just to download the information but to have a regular catch-up with the person to find out what they’re coming up against.  “I do this with males and females. I have people throughout the organisation who are looking at the next stage in their career,” she says.

Here’s an example: an ambitious young white male in his thirties looking to progress his career, was concerned that there was a bias ‘towards diversity’ in terms of gender and race. He feared he wouldn’t fit into that group, and was worried how he could otherwise differentiate himself: “I suggested that he be part of the positive change and show that he understands the value of having a team around him that is diverse and be able to leverage that,” says Townsend.

She is however deeply involved with the company’s WISE Network, a group which works to create a stronger gender balance within Dell. WISE is part of a wider network of Employee Resource Groups (ERGs) within the company. It runs a whole range of events and activities including sought-after meet-and-greets with senior company executives travelling to Ireland from abroad, who will also often take up invitations to address members of the WISE group.

WISE also has links with the broader community – it encourages young women to take STEM subjects at school and college through its Transition Year programme called ‘IT is not Just for Geeks’. “This is an interesting initiative – after getting its start in Dublin it went countrywide”, says Townsend, and is now a global initiative.  “We’ve also shared this programme with the group Connecting Women in Technology group, a network of 13 organisations based in Dublin, which is now sharing the programme in schools it works with.”

Gender equality is important to Dell and, observes Townsend, there’s a very strong female presence across the managerial team – but this is not as obvious in purely technical roles such as tech support and sales because of the lack of suitably qualified female candidates.  “We’re so committed to attracting girls into these positions so that we will have a more balanced pool of candidates.”

Complementing the schools’ ‘geek’ programme has been the development of another important initiative – a parents’ portal, or website full of easily accessible information about the careers available in the tech sector – which will be coming online very shortly.  “Parents are key influencers regarding the courses their children choose at third level – much more so than the student’s peers, so the issue is how to support parents who don’t have a background in technology and help them become more comfortable discussing the issue with their children.”

Despite all of this she still somehow finds time for what is an extremely very challenging job. As Dell’s Irish GM, Niamh is responsible for the company’s business in Ireland and Northern Ireland, and for its 2,300 staff, primarily based in Dublin Cork, Limerick and a smaller group in Belfast.  “I have responsibility for the commercial business on the island of Ireland and all sales of Dell products and services,” she says.

And yes indeed, there are some 12-hour days, because the job involves a fair bit of travelling around Ireland, “to Limerick where we have a solutions centre, to Cork where there’s a high-tech multilingual software base for Europe, Middle East and Africa, and to Belfast for customer meetings.”

However, says Townsend, what really fires her during those longer days, is understanding what customers are trying to achieve using Dell technology.  “Is our technology giving them an edge as regards competitive advantage, for example, or if they are trying to build a strong foundation for a business, and our technology  gives them technology continuity and resilience.”

“For me it’s about seeing what our customers can do with our technology and how it improves their business performance – that’s a great motivator and it’s what keeps me ignited and interested during the long days.”

See the full list of our WMB Award 2105 winners here.

A few years ago, a book about a stressed-out...

The WMB Woman in Technology...

In corporate-speak, Michaela Blott is...