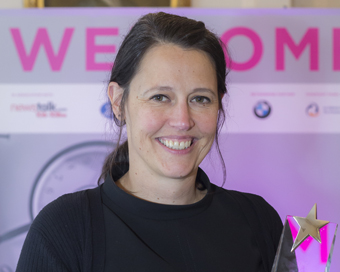 In corporate-speak, Michaela Blott is responsible for ‘strategic thought leadership’, ‘de-risking of new projects’ and ‘building technology leadership through vision’.

What all of that really means, however, is that Blott is basically a ‘back to the future’ kind of gal – and one of the country’s  top scientists.

She leads the high-tech, ultra-specialised Research Labs team at the Xilinx European HQ in Dublin, a group of heavy-hitters  tasked with the responsibility of predicting what the technology landscape will be like several years down the road – and what cutting-edge industry will be doing by then.

Blott’s official title is Principal Engineer and Engineering Director, Xilinx Ireland – Xilinx is an American semiconductor company with over 3,000 employees, which established a Dublin operation in 1995  and currently employs more than 300 people in this country. “My Mum’s always asking me what I do for a living,” laughs the 45-year-old Stuttgart native.

After earning a Master’s Degree in Computer Science,  Blott attended the renowned Swiss university ETH Zurich before spending several years working at the prestigious Bell Labs in the US, a job she describes as “fabulous.” “You were working with brilliant people. It is a fantastic place.  I was there for seven years,” recalls Blott, now the mother of a family of four living in the seaside suburb of Malahide, Co. Dublin.

After re-locating to Ireland in 2002 – the country was in full Celtic Tiger throttle at the time, she recalls, and there were lots of jobs to be had – Blott found a job with a company which made test equipment for planes. However, when the America company  Xilinx opened a research unit at its Dublin base, she was the very first person on board.

“Our research department is constantly heading out and checking the technology landscape  to see what the new trends are and predicting what the industry will be doing in the next five years. We’re a bit like the army scouts of old, in a way,” she explains.

“We go out and identify technological trends and make sure that the semi-conductor devices and tools we build have the appropriate facilities for what’s coming down the track in the technology sector.” The work requires enormous amounts of in-depth research which is carried out through team members’ attendance at high-level conferences as well as significant amounts of ongoing collaboration and discussion with universities, businesses and start-ups:
“We collaborate very closely with start-up companies, customers and universities such as Stanford, Cambridge and Trinity College,” says Blott, a member of the team which won the overall prize at the inaugural US-Ireland Research Innovation Awards 2015.

She heads large-scale international collaborations with leading universities such as Stanford and Cambridge and is an industry advisor on the council for the Irish Centre for High-End Computing (ICHEC). “We’re constantly checking to ensure that the work we are doing is relevant to the needs of the marketplace. We’re constantly on the look-out for what’s new in the technology sector. When we see something, we build prototypes.”

“For example we’re currently investigating how to reduce energy consumption in the technology sector,” says Blott, who heads up a team of seven researchers and between four and six graduate students who compete from all over the world to fill the much-sought-after internships at the unit. “I love the work we’re doing. We’re pushing technology forward here.”

Their work has a very significant impact on what’s available in the technology sector and it also has impact on  business and technology. “It’s a stimulating environment where you get to work with some of the smartest people on the planet – and it’s also fun!”

She was delighted to receive the WMB Women in Technology award, and says she’d love to see far more women working in the tech sector: “These are good, interesting jobs and Xilinx is a good company. Technology-sector jobs are good jobs with high-quality companies who appreciate the importance of work life balance for employees, and not enough women are taking them up.”

She’d encourage more women to consider careers in this sector. “Sourcing good female candidates in the areas of computer science and electrical engineering is very difficult.”

Who will you nominate for the FEXCO WMB Woman In Technology Award 2016?

Pay it Forward was the theme of our recent...