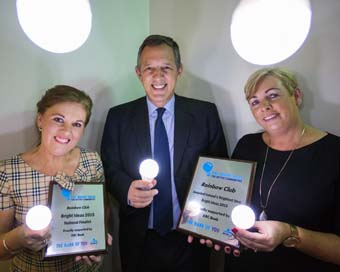 KBC Bank Ireland has revealed the results of a public vote to find the overall winner of this year’s Bright Ideas community support initiative, with Cork’s Rainbow Club for Children with Autism crowned the people’s favourite at an awards ceremony in Dublin last night.

Based in Mahon, the Rainbow Club will use the €7,500 funding to equip indoor and outdoor spaces at the club designed to support children with autism and sensory difficulties. The areas, including a garden, will enable the children to mix in an environment created with their specific needs in mind and encourage parents and siblings to use the spaces as a place to relax and socialise together with other families and children, while receiving support.

Over 300 community projects applied to KBC’s Bright Ideas for funding this year. Entries were reviewed by independent judging panels at a local level. A total of 40 community projects were shortlisted for funding and shared in a pool of €100,000 donated by KBC as a way to support individuals and groups working to transform their communities. The judges’ selection highlighted ten projects – including the Rainbow Club for Children with Autism – to go forward to the National Final for public vote.

The Rubicon Centre, a business incubation...