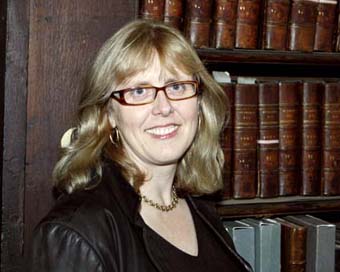 Professor Jane Ohlmeyer, Professor of Modern History and a Fellow of Trinity College Dublin, has been appointed the new Chair of the Irish Research Council.

The appointment was recently announced by the Minister for Skills, Research and Innovation, Damien English. Professor Ohlmeyer is the Erasmus Smith Professor of Modern History at Trinity and the Director of the Trinity Long Room Hub, the Arts and Humanities Research Institute of Trinity.

She was a driving force behind the establishment of Trinity Long Room Hub, which promotes multi-disciplinary research, and of the 1641 Depositions Project, which is now a European flagship initiative.

Over the years Professor Ohlmeyer has attracted significant amounts of highly competitive funding for her own research projects and for her graduate students. She has considerable expertise in overseeing major editorial projects and helped to secure over €1 million in funding from the IRCHSS, the AHRC (the UK funding council) and Trinity College for the digitization and online publication of the ‘1641 Depositions’.

FitzGerald Solicitors in Cork has appointed...

Rose Hynes was appointed to the Origin...