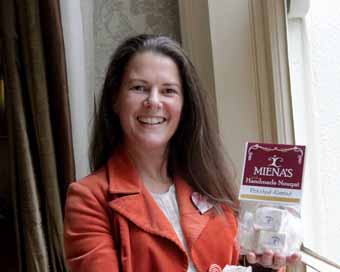 Supported by Microfinance Ireland, South African-born Miena is business owner of Miena’s Irish Handmade Nougat in Wicklow. Together with John O’Donoghue of Dublin Indoor Football in Fingal, the pair also met with the Minister for Business and Employment, Ged Nash T.D. in Dublin to mark European Microfinance Day and to highlight the accessibility of funding for microenterprises.

Set up in 2012 by the Department of Jobs, Enterprise and Innovation under the Action Plan for Jobs, Microfinance Ireland works in partnership with the network of Local Enterprise Offices to offer business loans of between €2,000 and €25,000 to companies with less than ten employees and with a turnover of less than €2 million.

Miena’s Handmade Nougat, supported by Local Enterprise Office Wicklow, was established in 2012 and employs two people. The company supplies eight different flavours of handmade Irish nougat to multiples and independent stores around the country, including 250 SuperValu stores and Avoca Handweavers.