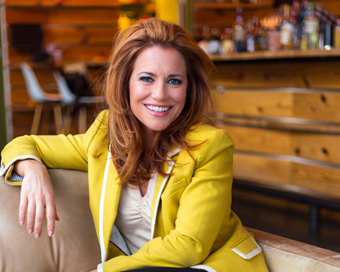 Ingrid Vanderveldt has an impressive CV. With a career encompassing roles including TV host, business advisor, change agent and investment consultant, her current project ‘Empowering a Billion Women by 2020’ aims to get a mobile device into the hands of every woman, and provide access to financial literacy and mentoring tools.

Growing up in Washington DC, one of four children in a family she describes as “traditional”, Ingrid wanted to be a missionary. However, that’s not exactly where she’s ended up. “I realised I was a pretty effective capitalist! I am good at building business, solving problems and creating opportunities.”

“My parents were always huge supporters and raised me to believe that with hard work you can make things happen.” After studying architecture in Savannah, Georgia, Ingrid ran for office for the American Institute of Architecture Students. While in that elected role, she realised that to make her voice count in a boardroom, she needed to know what she was talking about, and decided to enrol in the University of Texas at Austin to study law and business.

While in Austin she established her first company, a data mining company called Infoluminate, and never looked back. “I never finished the law school part, I started building companies, both successful ones and miserable failures,” she explains.

Like many entrepreneurs, she acknowledges it’s the failures that teach you most. On one occasion she invested so heavily that upon the venture’s failure she became homeless.

“I could have gone back to my parents, but I was embarrassed at failing. So I know first hand what it is like to lose everything. I don’t even remember exactly what the company was, it was in the tech/data space – it was 15 years ago! I kept pushing it forward and reinvesting, I believed I would figure it out… I hadn’t learned the key trigger points every entrepreneur faces and the signs you’re gone too far and need to re-evaluate.”

It was a valuable lesson. In 2011, Ingrid went to Dell with an idea; to collaborate with the tech giant towards ’Empowering a Billion Women by 2020’ by getting “tools, training and technology into the hands of women and entrepreneurs” worldwide.” She was the company’s first Entrepreneur in Residence, and says that the message of EBW2020 has reached over 600 million people now, through social media and speaking events.

“It was built out of a calling. I’m a missionary and a person of faith, and I learned I had to follow whatever I understood my calling to be. It was a scary idea – to reach one seventh of the world’s population – but it brought me to Dell and I realised I could reach this goal.”

Since Ingrid left Dell, EBW2020 has evolved into a “global movement to empower women to gain access to mentorship and business tools” and she recently rolled out the web presence of the project, mintHER.com. “It’s an engine powering the community, women can pick and choose elements of the business and use them, and it’s available to everyone everywhere.”

“If you’re a businesswoman in Uganda, mobile technology is the secret sauce to delivering the help and resources that they need to build a pathway and sell into the world. Without technology, the entire world is what they see right in front of them. It’s a place where they’re told not to have jobs, just to be mothers, but this way they are linked with other women around the world.” Ten percent of the profits go to the EBW2020 Foundation to help women access these resources.

Ingrid will visit Skibbereen in November to speak at Ireland’s first ever National Digital Week will take place from November 3rd – 8th in Skibbereen in the heart of West Cork, with over 2,000 entrepreneurs, digital marketers and technology enthusiasts expected to attend. She loves coming to Ireland.

“I’ve never seen a community of people like the Irish people. There’s a reason they’re called the fighting Irish! They are committed to creating a strong country, with very clear goals.”

Inga Beale, the CEO of Lloyd's of London, is...