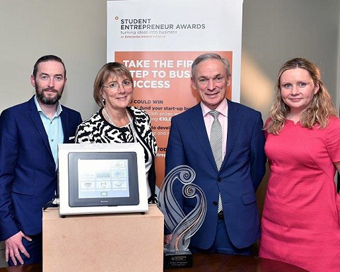 The Awards, now in their 35th year, are open to all full-time third-level students in the Republic of Ireland, and attracted submissions from over 1,200 students in 2015.

They are part of an ongoing drive aimed at tapping into the potential for students to turn entrepreneurial ideas into commercial businesses. The objective is to encourage third-level students to start their own business as a career option.

With a total cash prize fund of €35,000 and expert mentoring, guidance and consultancy worth €30,000 from the blue-chip sponsors, the Awards provide a platform for ambitious and enterprising third level students to build a viable and commercial business venture.

Julie Sinnamon, CEO Enterprise Ireland, said: “Start-up businesses are the life blood of the indigenous economy and make a positive impact on job creation in towns and villages all over Ireland.  In driving entrepreneurship, we need to play to our strengths, like the fact that Ireland has one of the youngest populations in Europe.”

The closing date for applications is March 17th 2016. www.studententrepreneurawards.com

CoderDojo Partners Up With BOI

Bank of Ireland announced an partnership...