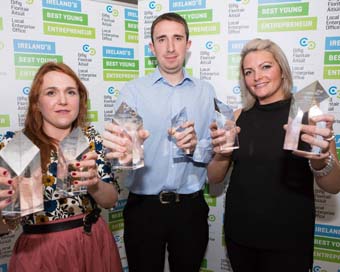 The winners were chosen from 45 young entrepreneurs, shortlisted from almost 150 applicants in the competition launched this summer by the LEOs in Cork, as part of a nationwide search to find ‘Ireland’s Best Young Entrepreneur’ (IBYE). Five out of the nine winners were women and they’re listed here:

– The Best Idea category was won by Breffney O’Dowling Keane, who received €10,000 investment in her company, FruitCubed. FruitCubed are fruit based stock cubes which utilise waste and over-ripe fruits to produce a product with an extended shelf life which delivers a tasty, innovative, nutritional solution

– The title of Best Start-up, and €20,000 investment, went to Gail Condon, founder of Writing for Tiny, which makes highly personalised children’s books about life’s changes, worries and milestones, allowing the child to engage with the story.

– The winner of Best Established Business category, and €20,000 investment, was Stephanie Lynch of On The QT, which showcases the places that as locals we fall in love with and return again and again

– The Best Start-Up category was won by Maeve O’Keefe, scooping €20,000 for her business Inspect 4, which has developed an animal handling crate to improve safety for the operator and the animal, and to reduce the physical work associated with hoof trimming.

The 2015 winners in each of the three categories (Best idea, Best start-up and Best established business) will now go forward to represent their respective LEO in a regional final in November. If successful there, they will represent Cork at the national final where ‘Ireland’s Best Young Entrepreneur’ will be crowned before the end of the year. www.ibye.ie