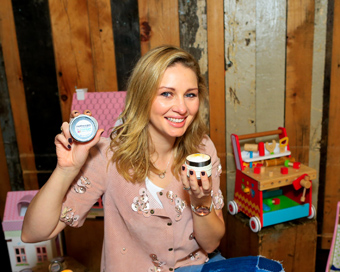 Mothercare Ireland is looking for people to join them in raising funds for LauraLynn, Ireland’s Children’s Hospice, by purchasing a bespoke candle that Mothercare has created for LauraLynn.

TV3 Presenter Anna Daly (pictured) has given her backing to the initiative which marks the start of a long term fundraising partnership. She says: “As a long-standing ambassador for Mothercare Ireland, I know family and children are at the heart of everything they do. This is a worthy initiative on Mothercare’s behalf and one that I hope raises much needed funds to keep this wonderful facility in operation.”

LauraLynn cares for over 200 families per year, providing respite, transitional, crisis and end-of-life care to children with life-limiting conditions and their families. LauraLynn also provides hospice care in the home following the introduction of the LauraLynn@HOME programme, which was launched as a pilot in June 2014. The programme operates in two HSE regions and covers 11 counties and to date has supported 64 families in 2015.

Sharon Morrow, LauraLynn Chief Executive said, “We are delighted to have been chosen by Mothercare Ireland as a charity partner. At LauraLynn, we care for children with life-limiting conditions, and their families, by providing high quality transitional care, home support, respite, crisis and end-of-life care.  Our approach is holistic ensuring that the whole family is supported, allowing parents to be ‘Mums and Dads’ rather than full-time carers.”

“We need to raise in excess of €3 million every year and fundraising partnerships such as this one with Mothercare Ireland enable us to keep the doors of our hospice open as well as LauraLynn@HOME our pilot hands-on nursing care in the comfort of a child’s home,” added Sharon.

You can purchase the candle for €3.95 in Mothercare Ireland stores around the country and all proceeds will go directly to LauraLynn. www.mothercare.ie

Dee's Wholefoods To Sell In...