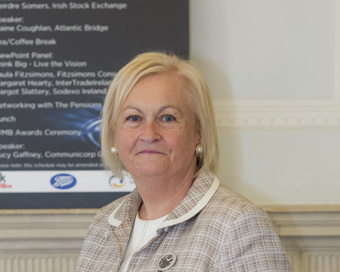 Hundreds of projects competed in the 2015 national competitions for a chance to represent their country in the European Enterprise Promotion Awards; 19 projects have now been shortlisted.

A record number of 32 countries entered the Awards this year with the most popular category being “Promoting the Entrepreneurial Spirit”.

Representing Ireland in the ‘Investing in Entrepreneurial Skills’ category is Going For Growth, which is run by Fitzsimons Consulting. Going for Growth focuses on encouraging female entrepreneurs to be ambitious and supports them to achieve their growth aspirations. Based on annual cycles, the initiative leverages the volunteer efforts of successful female entrepreneurs.

Paula Fitzsimons (pictured), who runs both Fitzsimons Consulting and Going for Growth, was the Boots WMB Empowering Women Award winner in 2014. Now she is the Chair of the judging panel for the WMB Awards 2015.

This year’s jury was made up of members of the outgoing Latvian Presidency of the Council of the European Union and the current Luxembourg Presidency along with representatives from the European Commission, the Committee of the Regions, business, and academia.

The jury established a shortlist of 19 nominees in six categories. The winners for each of the categories will be announced at a central event of European SME Week, the SME Assembly (November 18th -20th) in Luxembourg, to which all nominees will be invited. The prestigious Grand Jury Prize winner and special mentions will also be announced at the European Enterprise Promotion Awards ceremony.

The Startup Gathering 2015 programme of...