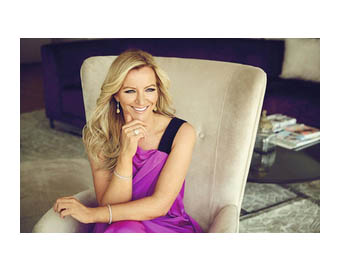 Leading entrepreneur and businesswoman, Michelle Mone OBE, has been appointed by the UK Government to conduct an independent review to encourage further business start-ups and entrepreneurship in disadvantaged communities, including areas of high unemployment.

Michelle was raised in a deprived part of Glasgow’s East End and, after leaving school at 15, she founded the Ultimo business in her twenties. She subsequently won the World Young Business Achiever Award in the US, as she took the lingerie brand global before she sold 80% of her stake of the business last year.

A designer and inventor, she has patented 16 different inventions, and now runs several businesses including UTan, as well as being in demand as a global speaker. Michelle was recently voted one of the top 7 inspiring female entrepreneurs in the world alongside Oprah Winfrey.

She will lead this major review having overcome a number of barriers on her own road to success. After leaving school with no qualifications and having her first child at 18, she battled through to create a globally recognised brand.

The review will identify the obstacles that people in the most disadvantaged areas face in becoming entrepreneurs, such as the lack of business networks and the lack of inspiring role models and mentors.

Michelle has been asked to draw on her own experiences for the review that will make recommendations to Work and Pensions Secretary Iain Duncan Smith and Business Secretary Sajid Javid in 2016.

The review will have a particular focus on disadvantaged groups including benefit claimants, women, young and disabled people and ex-offenders.

Michelle said: “My philosophy is that it does not matter where you are from, what education you have, or if you are from an affluent background or not, you can make it if you work hard, set your goals and never give up. I’ll be travelling across the UK from John O’Groats to Land’s End to talk to and listen to people and groups from all backgrounds. I want to learn about the barriers they are facing and what changes are needed.”

The Confederation of British Industry...

After years of research and seeking FDA...