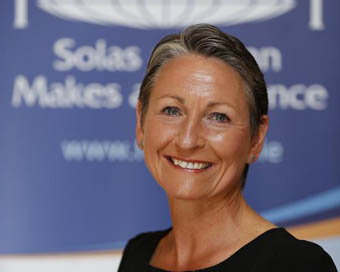 West Clare is not where you expect to find Fulbright Scholars leading the way in the study of motor skills in people with Autistic Spectrum Disorder, but Susan Crawford is no more typical than the landscape she comes from.

Susan learned the value of hard work early on and both it and a love of her native place have stayed with her.

“Our parents worked morning, noon and night in a small farm holding while also running a country shop. My father owned a lorry so collecting/delivering essential grocery and cattle feeds and a daily creamery run were the order of the day. We developed a strong work ethic from a very early age. We were a family of two boys and eight girls complete with an uncle and grandmother living with us. My mother came from across the road so her family was also an integral part of our lives. Both of my parents were strong advocates of ongoing education so each of us girls were encouraged to put the heads down and concentrate on our books. The boys would inherit the land.”

After looking after her elderly grandmother as a child, Susan naturally turned to nursing as a career and trained at Richmond Hospital in Dublin before completing stints in Israel and Saudi Arabia and eventually finding herself back in her beloved Clare.

A keen sports fan and runner, Susan completed courses in Holistic and Sports Massage Therapy and studied Sport and Exercise Science in UL in 1996 to improve her knowledge in the field. However, it was while studying for this that her son Tomás was diagnosed with Autistic Spectrum Disorder. She was devastated.

“The paediatric neurologist who diagnosed Tomás said “I feel like I’m sending you back to Calcutta, going home to Clare with no services”. I remember walking along O’Connell Street in Dublin with tears streaming down my face feeling the horrible desolation of my beautiful young boy’s potential being robbed. The innocent hopes and dreams of rearing an All Ireland Hurling captain went down the swanny. But with that horrible desolation came an absolute resolve that Tomás would be afforded every possible opportunity to develop and grow and from there on the journey truly began.”

“I began to see how Tomás’ skills in this area were delayed; his balance, coordination and in particular fine motor skills were not where they should be and I wanted to make a difference.” The external examiner for her PH.D. oral exam was Professor David Sugden, an internationally renowned expert in the field of motor impairment. He encouraged her to do a PhD.

“In 2004, I applied for a scholarship from IRCSET, was successful and was finally on my way. I completed the first Irish study examining the effects of physical activity intervention for students with autism and learning disabilities. So you could say Tomás was my primary inspiration and autism my area of interest.”

Having completed her PhD, Susan works in UCC but has recently been awarded a Fulbright Scholarship, which sees her temporarily relocating to California, along with Tomás. The research for which she has been awarded the scholarship involves exploring the use of mobile digital technology to develop the different aspects of movement for people with autism.

“Fundamental movement skills are like the alphabet of physical activity and by developing these there is greater potential for individuals with autism to engage in quality physical activity.”

“To date Tomás has brought a real sense of meaning, purpose and depth to my life. He is and always will be, my guiding inspiration, as a mother, a woman and a professional. “Autism isn’t the problem but rather our need to learn and accept difference and diversity in every walk of life. Everyone has potential to be the best they can be, given opportunity and understanding. It is up to each and every one of us to open the doors and let this potential breathe. Since our arrival in San Francisco, Tomás and I have jogged our way around the city across the Golden Gate Bridge and beyond. We seize every opportunity to be out there and among the people, exploring, celebrating and learning and that’s the way it should be.”

Nothing square about Claire!

Adolescents these days are preoccupied by...