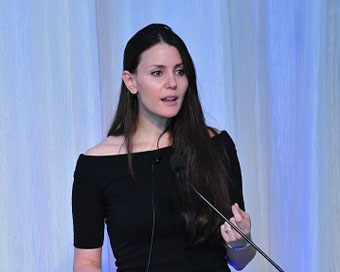 The Minister for Business and Employment, Ged Nash TD, announced today that Dr Nora Khaldi will represent Ireland at the EU ‘Made in Europe’ TEDx event.

The Dutch Presidency of the EU (January-July 2016), together with TEDxBinnenhof and other European TEDx communities, is organising a multidisciplinary event focused on the power of ideas to change attitudes, lives and ultimately, the world. For the first time the 28 Member States of the European Union will join forces to seek and find the best and most inspiring ideas that have the potential to change the world for the better.

Dr Khaldi is a mathematician with a PhD in molecular evolution and bioinformatics from Trinity College Dublin. She is also the founder and CSO of Nuritas, a biotechnology company which was recently awarded the 2015 SVG Thrive Accelerator Award at the ‘Forbes Reinventing America AgTech’ summit in Salinas, California.

Nora was inspired to commence work on identifying highly impactful molecules for human health having seen a presentation on the impact of food on the neuronal, muscle and gut development of wallabies. To better understand the impact of food on health, she established a brand new field of science, that of food bioinformatics at the molecular level.

Dr. Nora Khaldi said: “It is an honour and a privilege to represent Ireland at the EU ‘Made in Europe’ event and to demonstrate how innovative Irish companies are meeting serious global needs. I have always believed that disruptive innovation, which is what Nuritas is all about, is the key to solving many of the 21st century health issues. It is truly inspiring to see that the EU is highlighting and supporting so many revolutionary concepts and life-changing ideas.”

The European entrepreneurs selected by their respective Member States will present solutions to a variety of societal challenges, ranging from job creation to healthcare solutions to climate action.

All national candidates will be invited to Luxembourg to the EU SME Assembly in November. The ten best European solutions for global challenges will then be invited to The Netherlands during the Dutch Presidency in 2016 on 31st March to present their ideas on the TEDx stage in The Hague.

A team of Microsoft Ireland employees have...