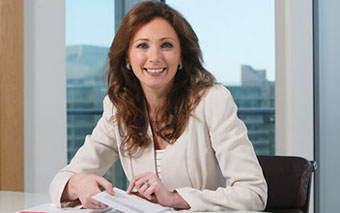 Educating our young people is one thing but enabling graduates to successfully match third-level qualifications to the demand for specialised skills and services in a challenging and often turbulent workplace can be something else.

But it’s happening, primarily thanks to a range of initiatives driven by people with vision and the strong support of the business community.  Take, for example, Ireland’s cutting-edge position as a major international funds hub.  We have a strong need for appropriately qualified lawyers to maintain our competitive edge in this sector – yet incredibly, until 2013, there was no programme on funds law at university level here.

The solution came, as it often does, through sheer synchronicity – a chance meeting in 2012 between funds lawyer Liz Grace (pictured) and the founding Professor of Maynooth Law School, Sandeep Gopalan.  The result – a partnership between top legal firm Matheson and Maynooth University, which offers graduates  accelerated entry into Ireland’s growing international financial services sector.

That meeting led not just to the establishment of Ireland’s only university-taught course in the highly specialised area of Funds Law, but to a golden opportunity for some of the best performing graduates to win a sought-after six-month internship at this prestigious Irish law firm.

Matheson currently has two full-time employees from the first year of that course, Andrew Norry and Megan O’Connor, who were both initially awarded six-month internships at the law firm.  “Given the global success of Ireland’s funds industry I felt it was time for a specialised course that taught students about investment funds law,” explains Elizabeth Grace, partner at Matheson’s law firm, and now Visiting Professor in Funds Law at  Maynooth University.

She had wondered for years, she says, why such a course was not being taught at university level here. The course forms part of the Master of Global Law Degree  at Maynooth University, and of the Masters of International Business Law Degree offered jointly by Maynooth University and the University of Lyons in France.  “If Ireland is to continue being successful as a global funds hub we must seek to produce skilled high calibre graduates. The provision of relevant third-level courses is crucial to achieving this.”

The attractions of such a course for the ambitious law student are numerous she points out – students get to study an innovative area of law which is not being taught in any other Irish university and they’re exposed to the best expertise in the field. But there’s more – they’re also  invited to Matheson’s offices in Dublin every week to be taught in a working environment, while the best-performing student gets a six month-internship at this top legal firm.  “However our first batch of graduates were so talented that we offered two internships! “Each of them is now in a full time position with Matheson,” Grace declares.

As there was no precedent for such a course, she had to create it from scratch, including the syllabus. However, she says, the project could never have worked without the full support of Professor Gopalan and Professor  Michael Doherty in Maynooth University and her colleagues Michael Jackson and Tara Doyle.

Such far-seeing opportunities are not restricted to law graduates – as of now, InterTradeIreland, a cross-border business development body which aims to promote graduate development North and South of the border, is seeking a range of graduates for its Fusion project. This initiative helps graduates gain supported 18-month contracts within the business sector, in an environment allowing them to hone their skills, carve out a good reputation for themselves, and make valuable industry contacts.

Running for the last 13 years, Fusion is a specific and highly successful programme tailored for graduates, explains Dianne Dundas, Project Manager with InterTradeIreland. “All of our projects come from industry. The Fusion project is all about innovation, product development and process improvement.”

Here’s how it works: First a company  – usually an SME with an average of 15 employees – comes to Dundas  in search of  expertise in a particular area. This could be a new form of packaging or a way of expanding a product’s shelf life. “We match them up with a lecturer or academic in a college on the other side of the border who has the relevant expertise,” she explains, adding that the next step is assisting the company in appointing a suitable graduate.

“These projects are very specific so we advertise for specific graduates,” she explains – Fusion for example, is currently seeking a range of graduates from mechanical engineers, to software developers and kitchen designers.  “The graduate applies for the job and undergoes a full interview process.  If he or she is appointed, they will get an 12-18 month contract, depending on the project.”

The Fusion project supports up to 50% of their salary. It’s a very successful triangle – the academic or lecturer works in a supervisor or consultancy role, providing two days a month to the company while staying in close contact with the graduate to ensure the project is proceeding according to a pre-prepared and highly detailed plan.  “There are targets set up for the graduate to meet, and in about 95% of cases, the project is extremely successful.“

“Some of the graduates have done so well that they have even been offered shares in the business!”  Each year Fusion oversees some 60 such ‘matches,’ and more than 500 matches in the 13 years since the project began.

AbbVie and Sligo IT

Moving to the northwest , it was recently announced that AbbVie – a global biopharmaceutical company – is partnering with the Institute of Technology, Sligo, to establish a new medical device-focused education programme on its Sligo campus.

“Working with AbbVie or other external partners on our curricula make them highly attractive for graduates,” says Professor Vincent Cunnane, President of the Institute of Technology, Sligo. “Together with these types of partnerships, we are also growing Sligo’s presence and reputation in the IT and medical device fields, which ultimately benefits the people of Sligo.”

And finally, in June, The Learnovate Centre, Ireland’s centre of excellence for the EdTech sector, held a conference in Dublin called ‘EdTech Enabling the Knowledge Economy’. Their goal is to enhance the competitive advantage of the learning technology industry by partnering business with leading researchers from world class higher education institutions. With 200 people in attendance, they’re not alone in their mission.

When I called, Michael Campion was just back...

Three steps that you can take to begin to...