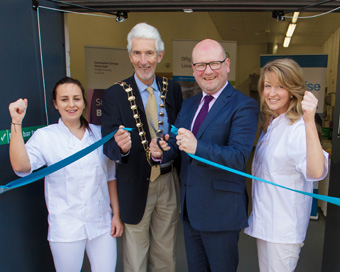 Minister of State for Business and Employment Ged Nash TD together with the new Mayor of Fingal, Cllr. David O’Connor officiated at the opening of three start-up food production units in Drinan Enterprise Centre, Swords.

The three food start-up units, at 570sqft each, have been professionally designed to comply with all required Food Safety Standards. Interest in the food units has been strong since the recent announcement that they would be available for occupancy in June.

The first local food producer approved to take one of the three units has now been announced. Trish Kelly of The Cupcake Store from Malahide will move her recently established cupcake production facility to the first unit next week.

Enquiries about the food units available in Drinan can be made by phoning Declan Ryan in the Local Enterprise Office on 8900800, or email declanryan@leo.fingal.ie

DCU And GAA Team Up

Workers are battling with increasing...