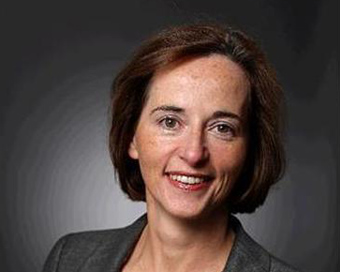 After graduating from UCC in 1984, she opted for a legal apprenticeship. “People who know me now wouldn’t believe I was too quiet and shy, but my own father thought I was probably too shy for a career in law”. However, with the mentoring of her then boss, well-known Cork city solicitor Kieran McCarthy, that soon changed.“He took a keen interest in me and my development. In fact, we’re still in contact. He was a great mentor, very supportive, and he gave me the confidence to believe in myself.”

From trainee solicitor, right to the heights of Dublin’s commercial law sector and into another world entirely, that of finance, as the Managing Director and head of Trustee at BNY Mellon, Kelleher’s approach to dealing with people has clearly drawn on this auspicious start.

“I really believe in treating others as I’d like to be treated. I appreciate all the legs up I got along the way and I try to foster teamwork. I would look on all the jobs as equal – everybody has a different role but everybody in a company is working together to try to achieve the greater goals of the organisation.”

After completing her apprenticeship, Kelleher spent a year in Atlanta on a J1 programme, learning about commercial law. It was a big transition from a small local practice, but lead her into her next job, at a commercial firm in Dublin.“I qualified in the late 1980s and there were just more opportunities in commercial law. It wasn’t a very deep and considered decision; I didn’t have a burning passion for commercial law, I followed the work,” she says now. However, once in, she grew to love it.

Dissolution of the firm she was working for lead to what was an enormous opportunity for a young solicitor still in her twenties; the opportunity to become an equity partner in new firm, Dillon Eustace. Now recognisable as one of the leading firms in Ireland, it started life with seven equity partners, four men and one woman, just as the IFSC was taking off. “It was all circumstantial,” she says now, “you’d really put it down to hard work, luck and the people that you meet.”

Her move to Citibank after just two years was partly due to the pressure of juggling a young family and a young firm, but far from taking her foot off the pedal, Kelleher set up and ran the trustee section at Citibank for three years, during which time she became involved in the Irish Funds depository committee, growing to know a lot of people in the industry.

Returning to Dillon Eustace in 1997, Kelleher had retained much of her depository network, and after almost ten years in a role as head of regulatory and compliance, completed a diploma in executive coaching. This, she says “was the start of looking out for other things – but change takes time.”

An opportunity came along to join BNY Mellon, and it was the perfect fit. Back to a role in Trustee but with the legal background to understand what was happening during a particularly busy time for the industry with a raft of legal changes coming from Europe including the Alternative Investment Fund Managers Directive.

As MD and Head of Trustee at BNY Mellon, Kelleher has overseen many changes and manages more staff than ever before. Her legal training is useful, she says.“It has made life easier in terms of understanding and anticipating the changes that are happening. I’ve only been here since April 2012 and I think I’ve achieved a lot in that time. BNY Mellon is a huge global company so, while I may not continue in this role long-term there are many others within the company.”

The drive that has seen her to this point in her career also lead Kelleher to become a Chartered Director earlier this year, something she says was “a way to fill a perceived gap in coming from a purely regulatory background. I’m conscious of the difference, but I like the variety, and the challenge… maybe I’m just looking for excitement!”

Mary Curtis, you could say, became a primary...