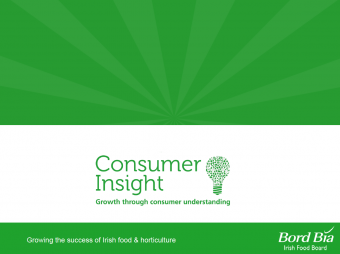 A new Bord Bia study, entitled ‘The Irish Consumer 2015’, just launched shows that today`s consumer is empowered, self-reliant and seeking life balance. The results of the study, undertaken in conjunction with The Futures Company, were presented this morning to 100 representatives from Irish food and drink companies at Bord Bia headquarters in Dublin.

Speaking at the event Helen King, Bord Bia’s Director of Consumer Insight, Bord Bia commented, “Ireland has experienced huge changes in the past decade at social, economic and technological levels which have impacted on consumer attitudes. Insight such as this assists companies to be future-focused and consumer driven to anticipate changes in people’s lives, whilst allowing the business to make plans for change and act as a catalyst for innovation”.

The report shows that perceptions of the economy are improving with over half of people (51%) believing that “things are going well financially in Ireland”. This has risen from a low of 8% in 2011. People’s attitude towards their personal financial situation has also improved with 56% of respondents feeling that things are going well nowadays, up from 46% in 2011. This compares favourably on a global scale where people are feeling less positive, with less than 40% feeling their personal financial situation is going well. Buoyed by the sense of having weathered the storm, Irish consumers also feel increasingly empowered. Over 70% of Irish people agree that their lives are largely shaped by the decisions they have made and actions they have taken. With this greater positivity, comes an improved confidence with some 71% of Irish people considering themselves knowledgeable about money matters, in comparison to 52% globally.

Three specific values have emerged as part of the new consumer agenda – self-reliance, balance, and post-materiality.

Reduced levels of trust towards institutions, brands and businesses is creating a desire for self-reliance, leading consumers to make more considered purchase choices. Consumers are now looking for the human face behind everything with increasing expectations around transparency and responsibility. Ultimately, consumers are becoming as self-reliant as possible (63%), instead of seeking help and guidance from experts or professionals (37%).

Consumers are taking extra care when making purchases with 72% of people increasingly likely to spend time researching a product before making a purchase (up from 67% in 2010). Sixty-seven per cent now consider that price is more important to them than brand names, compared to 58% in 2010.

People are living increasingly time pressured, complex lives. They are beginning to realise the importance of disconnecting and the growing consideration of balance is being driven by a desire to manage their lives. Now over 40% of consumers agree that it is hard to find space in their lives to think, reflect and switch off from everyday stresses. Surprisingly, the younger age groups are finding it the most difficult to switch off from everyday pressures with 55% of 16 to 24 year olds agreeing with this.

People are also are looking for ways to simplify their lives (66% strongly agree with this in Ireland). Consumers seek balance as a way of muting the modern lifestyle as opposed to changing it. People in Ireland are starting to recognise that they have the tools to find time for everyday reflection. They are also placing greater value on those ‘pause, stop, reflect’ moments. An increased awareness of balance is leading consumers to re-assess their online presence. Over 60% agree that it is important for them to sometimes disconnect from online and mobile communications. In the same vein, people are feeling the tensions of technological realities with some 76% of Irish people concerned about data protection and privacy on the internet.

Consumers are reassessing the value of material possessions and have begun to return to the important foundations in life. Post-materialists simply de-emphasise material pleasures in comparison to higher order needs such as freedom, self-expression, and the quality of life. For instance, only 17% of Irish people believe they would be happier if they owned more material possessions, however this remains important in other European markets. The post-material mind-set marks success in terms of good health and being debt free. Some 94% of people agree that being physically fit and in good health is a sign of success. The same amount of people in Ireland view being debt free as a sign of success, in comparison to 59% globally.

The spirit of togetherness – collective kinship – remains strong. Ninety-five percent of Irish people believe they know someone they could rely on in time of need and similarly, 92% view being a dutiful member of your family as a sign of success. This tie is seen to be no less strong amongst younger consumers. Irish consumers also believe in the power of ‘us’ with 74% of people believing that groups of individuals making a small change can make a real difference in the world, compared to 61% globally. Over 60% of people think we should prioritise the interests of our country over the interests of the wider world, and in this regard, global citizenship is even less of a priority for younger consumers.

Visit www.bordbia.ie for the report.

TanOrganic, the world’s first and only...